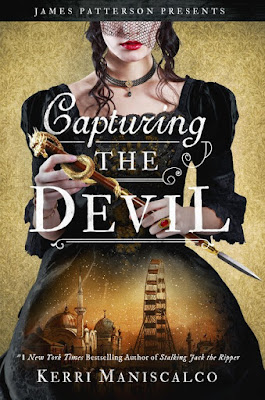 In the shocking finale to the bestselling series that began with Stalking Jack the Ripper, Audrey Rose and Thomas are on the hunt for the depraved, elusive killer known as the White City Devil. A deadly game of cat-and-mouse has them fighting to stay one step ahead of the brilliant serial killer---or see their fateful romance cut short by unspeakable tragedy.

Audrey Rose Wadsworth and Thomas Cresswell have landed in America, a bold, brash land unlike the genteel streets of London. But like London, the city of Chicago hides its dark secrets well. When the two attend the spectacular World's Fair, they find the once-in-a-lifetime event tainted with reports of missing people and unsolved murders.

Determined to help, Audrey Rose and Thomas begin their investigations, only to find themselves facing a serial killer unlike any they've encountered before. Identifying him is one thing, but capturing him---and getting dangerously lost in the infamous Murder Hotel he constructed as a terrifying torture device---is another.

Will Audrey Rose and Thomas see their last mystery to the end---together and in love---or will their fortunes finally run out when their most depraved adversary makes one final, devastating kill?

“Beyond life, beyond death; My love for thee is eternal.”


Capturing the Devil is the Fourth and Final installment in author Kerri Maniscalco's Stalking Jack the Ripper series. The story takes place January 1889 thru February 1889. After disembarking the RMS Etruria, Audrey Rose Wadsworth, and Thomas Cresswell are in New York City along with her uncle, Dr. Wadsworth to assist in a murder investigation. Wherever Audrey Rose and Thomas go, murder seems to follow them around.

Audrey's investigation into new murders appearing in New York City takes a long way to get to a point where she has some clue as to who the actual villain is. I made the connection as to who the killer was almost immediately after he is introduced. The story doesn't stay in New York that long. To add even more confusion, when Audrey Rose and Thomas are about to be married with all their friends in attendance, an unforeseen event takes place that stops them from being wed. Turns out, Thomas is already betrothed to another.

Cresswell's father blackmail's Thomas into marrying someone else who coincidentally decides to show up at the wedding. If he doesn't marry the woman he chose, he will lose his inheritance and his sister will be forced to marry an old miser. Marriage in this universe is all about doing business and rising up in your status. Thomas is not at all happy with the proceedings, but that is pale in comparison to Audrey who has allowed Thomas into her heart, and made the choice to be with him while they are both under the tutelage of Dr. Wadsworth.

After the interruption, Audrey and Thomas choose to flee for Chicago. Chicago is hosting the World's Fair. Have to say, this added a legitimate feel to the story since the Fair was an actual historical event that did take place in Chicago. There are some returning characters from the previous installment including Mephistopheles (Ayden). To note, Audrey's is also disabled, her leg is injured and not healing properly leaving her needing a walking cane to get around.

Not like disability or the cane stops her. Since the beginning, Audrey Rose has been attracted to the dark whilst also looking into the mind of a famed serial killer. She's kicked societal expectations about how a lady is supposed to act in the teeth. She picked up being a Medical Examiner with almost no hesitation. Before this story, there were still so many questions surrounding Audrey's brother Nathaniel and what happened over the first installment in this series. I'm glad that this plot hole was filled in sufficiently to allow the series to end in a heart warming manner.