#Review - Eight Will Fall by Sarah Harian #YA #Fantasy 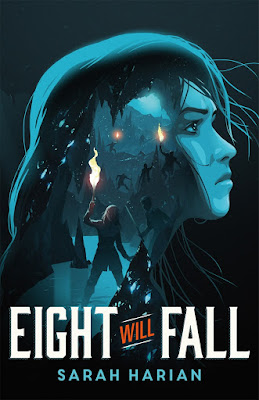 A girl leads a band of magical outlaws on a deadly subterranean mission in this exhilarating YA fantasy standalone.

In a world where magic is illegal, eight criminals led by rebellious Larkin are sent on a mission to rid their kingdom of monsters. Descending into an underground world full of unspeakable horrors, Larkin and her crew must use their forbidden magic to survive.

As they fight in the shadows, Larkin finds a light in Amias, a fellow outlaw with a notorious past. Soon, Larkin and Amias realize that their destinies are intertwined and she dares to dream of a future where they can freely practice magic.

But as the beasts grow in number and her band is picked off one by one, Larkin is forced to confront a terrible truth: They were never meant to return.

Lovers of dark, high-octane adventure will be enthralled by this genre-bending YA fantasy standalone, perfect for fans of Kendare Blake and Leigh Bardugo.

Eight Will Fall, by author Sarah Harian, is pitched as Six of Crows meets Suicide Squad, but actually shares no similarities with either. The story follows 17-year-old Larkin who lives in the Demura Isles with her family. Larkin is an Empath, a person who has the ability to project emotions called destruction magic. In this reality, empaths have no rights. They can't get an education. They can't be caught using any magic since it is banned. She is forced into working in the Ethera mines digging for luminite which is said to keep Empath magic in check.

What's worse is that Queen Karsyn Melay has a tendency of sending empaths into the Reach or the farms where they are never seen from again. Soon after this story begins, Larkin and her younger brother Garran are arrested and taken to the Queen's dungeons. The Queen gives Larkin, along with 6 other empaths and a non-empath a mission they can't refuse. They are to travel to the Reach and hunt down a dark under lord named Kyran and kill him. Kyran was banished to the Reach by Melay's ancestor Queen Ilona, but it's apparent that he or someone close to him is causing major issues.

Each chosen Empath has a family member held back as leverage, thus making their choice to participate an easy one. For Larkin, that is her brother Garran. The Reach is a dangerous underground world that has slowly consumed parts of the upper world as well those who live on the farms. As they descend into the net of underground tunnels, they realize the ancient Empath may not be a legend after all and that there’s something following them. As the group goes deeper into the Reach, Larkin discovers that her powers are actually growing.

With almost no skills, knowledge, or resources, the ragtag group must first learn to fight for their survival before they can complete their task and return home. Larkin must become a leader and discover a whole new path to her powers that seem to grow the further into the Reach they travel. A word of warning: Don't be fooled by those who claim there are (8) main characters. That is false. Larkin is the main character. The story is told from her perspective. This book is creepy and bloody and dark. The challenge for Larkin and her group is to stay alive since nobody that has gone after Kyran has come back.

In my opinion, the characters to keep an out out for besides Larkin are Elf, who came from a dancing traveling troupe, Jacque, who is a soldier as well as an empath who yearns to survive so she can finally marry the love of her life, and finally Amias, who has so many secrets it's hard to keep up with. Plus, he's the so called romantic interest in this story for Larkin. Apparently, this was supposed to have been a duology. I think the ending wraps things up nicely even though it felt a bit rushed, but I would not have minded if there were another book. Especially when it comes to following Elf on her next journey.