#Review - A Constellation of Roses by Miranda Asebedo #YA #Contemporary 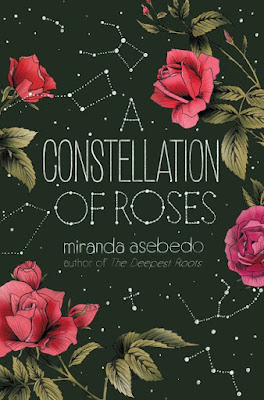 
A heartwarming contemporary standalone novel with the slightest twist of magic, A Constellation of Roses is perfect for fans of Anna-Marie McLemore and Emily X.R. Pan!

Ever since her troubled mother abandoned her, Trix McCabe has preferred to stay on the move.

But when she lands with her long-lost relatives, there’s something special about the McCabe women, something almost magical about their mysterious talents that reminds Trix of her own ability to steal things without anyone noticing, and almost makes her want to stay put for once. Her aunt’s pies seem to cure all ills, her great-aunt’s palm-reading never misses the mark, and her cousin’s ability to uncover a person’s deepest secrets by simply touching them is uncanny.

Before long, Trix feels like she might finally belong with this special group of women in this tiny town in Kansas. But when her past comes back to haunt her, she’ll have to decide whether to take a chance on this new life . . . or keep running from the one she’s always known.

With lovable and flawed characters, an evocative setting, and friendships to treasure, A Constellation of Roses is the perfect companion to Miranda Asebedo’s first novel, The Deepest Roots, which ALA Booklist called “a must-read” in a starred review.

A Constellation of Roses is the authors follow-up to her debut novel The Deepest Roots. 17-year old Trix McCabe has been living in various hotels doing what she needs to do in order to stay alive, dodging social services, and not having to return to another foster home after her mother went out for cigarettes and never returned. Trix has an uncanny ability of stealing things and not getting caught. She can literally walk into almost any place and walk out without being seen or caught. Shortly after the story begins, Trix is turned into the cops and given a choice by a judge.

She can either go to jail, or she can go live with her newly discovered long-lost family in Rocksaw, Kansas which she knew nothing about. Her mother never told Trix who her father was, so finding out that she has a family living in a small Kansas town is a shock to the system. Trix must stay with the family until she is of legal age as well as attend school. Trix is surprised to learn that her Aunt Mia, her cousin ember, and her Great-Aunt all have unique abilities of their own.

Auntie tells fortunes; Mia bakes pies that magically fixes emotions and Ember can read secrets upon touch. Auntie hints that Trix must learn to put down roots or else be enveloped by her haunting past. She can either dig roots here with people who care for her or she can runaway again like she is prone to do. As Trix starts to try and make a living with the McCabe family, she learns secrets about her past and realizes that this may be just the fresh start she needs to turn things around. This is definitely a twist of magical realism along with a coming of age story that most readers will enjoy.

The book provides a few scenes from the past which was nice because we get to see what Trix's life was like before having to go to Rocksaw and some of her memories especially of the "good year" gives us an insight on why she thinks that things can still go back to how they were. Trix learns how to be responsible. She learns to let people in, including students at her new school and the boy, Jasper Ruiz, who has some of his own issues to deal with which I won't spoil. I will say that the final part of this book is the most emotional.

How can it not be after all she's been through and then gets another kick to the head which causes her to choose to run back to her dark past and those who would only use her talents. My absolute favorite character is Mia. Mia is always looking out for her and trying to keep her happy. Even when Trix runs back to her old flame, she legitimately wants the best for Trix and for her to stay as long as she wants. Ember is the silent type who is slowly drawn out of her shell by Trix. Ember was too afraid of touching someone due to the fact that she can see your deepest, darkest secrets. Auntie was brutally honest and didn't sugar coat anything and she usually put everyone in their place with a dose of reality. Trix learns about Jasper when they go out on deliveries for McCabe Bakery and Tea Shoppe.

Overall,  A Constellation of Roses is an emotional journey that Trix goes through and how she eventually put down roots. Yes, I did get a bit emotional!