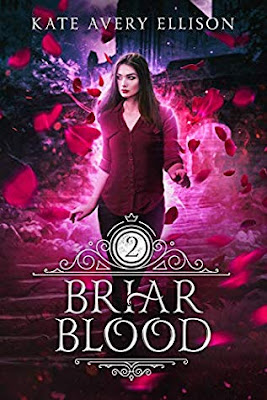 But after a harrowing assassination attempt and a shocking revelation leaves her reeling, Kyra must rally her courage and use every bit of her wits to figure out what's going on, and who wants her dead.

She has new secrets to keep.

And Spellwood Academy's annual, secret War Between the Societies is about to begin! Winner gains access to an area of Spellwood that holds the answer to a secret.

Meanwhile, other things are distracting her... namely, a certain elite prince whose kisses are like fire. A prince she's supposed to stay away from. A prince she can't resist.

Briar Blood, by author Kate Avery Ellison, is the second installment in the authors Spellwood Academy series. Protagonist Kyra Solschild learned some devastating secrets in the first installment. She's possibly royalty thanks to her missing father and she has magic. Now, she has to keep a low profile for fear that another assassination attempt will likely be successful. She still has no clue who is responsible since her former BFF has been expelled after her role in trying to kill her.
She's been forbidden & spelled by her mother and grandmother Azalea from telling anyone, including her roommates Lyrica and Hannah. What's even more disturbing is that Lucien, her would be suitor, was right about her bloodline. The last we saw Lucien, someone spelled a statue that came alive and knocked him unconscious after they kissed. Lucien has serious questions about Kyra. Is she some sort of troublemaker? Was she hired by his brother Griffin to get close to him? Or, could she be a spy?
The curious part is that they are supposed to be enemies and light is supposed to poison the night which Lucien belongs to. But, something more is happening and it demands answers. Is there meeting fated, because if not, why do they affect the other so much? Meanwhile, Kyra gets a bit more aggressive in seeking answers. Briar has some words with her Danger and Defense instructor Joras due to the fact that he is sworn to secrecy regarding her heritage, and he would rather she ran quickly away from trouble instead of walking right up to it and challenging it.
She decides to investigate who Tearly was seeing and who she answers to and why they want to kill Kyra. To make things even more interesting, the 6 societies have what's called a war between them. It takes place between Summertide and Hollowfell. Each society has to protect their orbs. The one left standing wins. There are hints and clues given at each society which challenges contestants to the limits. The worst part of the war is that the same society wins almost every year. Since Briar wants something in order to unlock key secrets, she talks her society, Briar, into an unusual alliance.
Normally Briar easily hands over their orb quickly and that's it. Not this year. This year they could be the last ones standing if Kyra's plans work. Kyra also entertains the thought of really learning how to fight since Joras refuses to help her. She really needs to learn since literally anyone can be an enemy. This is also a bad time to be half human with movements in several courts gaining tracking to rid themselves of those like Lyrica, Hannah, and Kyra.

The thing that drove my rating was the ending. It's stunning. It's heart breaking. It forces you to choose to read the next installment in hopes you get the resolution you believe it should have. It leaves Kyra in a devastating frame of mind which can only lead to more surprises in the next installment.