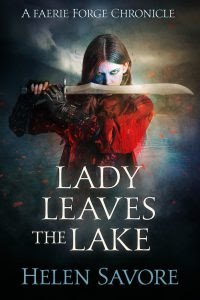 A smith’s courage is bound into a sword of destiny

Viviane is a fae smith, capable of creating epic weapons that shape the elements. Smiths aren’t permitted to fight in the battles that forge the faewilds, but Viviane rebels and finds herself responsible for the death of a herald.

Cast out by her family, Viviane must sunder fae society so that smiths are free to shape the world.

If the tales of King Arthur were true, given how much trouble and woe has come to the world, what crisis would it take for King Arthur to return? Stories like Lady Leaves the Lake, The Phoenix Grail, and Sword in the Throne, expand the Arthurian legend, not simply by retelling but continuing the story centuries later in modern times, as we approach King Arthur's return. While we follow our modern day problems we start to learn how the legend truly unfolded. The story channels a variety of influences: Oberon and Titania rule the Fae as Gods, Creator, and Fate.
There is a heavy emphasis on life, rebirth, and the soul's journey, as the concepts of reincarnation are central to the conflict between the humans, who reproduce, and the Fae, who are reborn. The author has a unique variation of the legends of Excalibur, Arthur and Viviane. This is the story of Viviane Llyn, a smith of her aquatic people, and the creation of the sword, Excalibur. Viviane appeared in The Phoenix Grail, but this is her story from when she becomes a smith, to when she creates the fabled sword which will become Excalibur.
To when she becomes the Lady of the Lake. This is a brutal world. Oberon's heralds are hunting those who are smiths called Llehfin.  All matter of mythical creatures like myrial, komodrian, dwarves, demions, seraphs, and Elves occupy this universe. War ravages the fae wilds, leaving main character Viviane and their companions to the task of forging magical weapons and artifacts to save their realm. After losing her mentor Escal, Viviane is hopelessly lost. Her only real friend is Gasperion, a dwarf who also appears in The Phoenix Grail, asks her to make a sword. A sword called Escalibor.
The world-building is fascinating, a perfect blend of familiar tropes, original concepts, and clever twists that fall halfway between. As the story moves through phases in her exiles and wandering to find where she will belong, she becomes a caravan guard with the name of Nimue, hiding her past identity. Mercenaries become her world and when she has tired, she is given the job of defending against the "Heralds who carry enormous lethal hammers with their seraphim elite. They bear the messages of death and war. Finally taking her last job she had refused, she stands before the Heralds.
Books by the author that have either been released, or will be:
The Phoenix Succession
Faerie Forge Chronicles