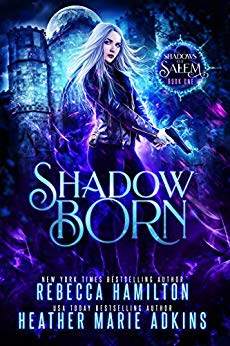 Chicago Police Detective Brooke Chandler is keeping a secret…and if she’s not careful, it could get her killed.

Brooke is no stranger to the supernatural. In Chicago, vampires are just as prevalent as drug lords, and infinitely more bloodthirsty. So when her partner and fiancé dies in a mysterious fire while chasing down a lead in Salem, she suspects something dark and otherworldly is at play.

Blessed with the ability to see into the past by touching inanimate objects, Brooke transfers to the Salem PD, hoping her talent will help her get to the bottom of things. Between dodging assassination attempts and being stonewalled at every turn, the going is tough. Add in a mysterious fae club owner with secrets of his own and a personal grudge against her, and it becomes nearly impossible.

If Brooke wants to play in the supernatural sandbox, she’s going to have to roll up her sleeves and get dirty. But how many people will have to die for Brooke to discover the truth about her fiancé?

Shadow Born, by co-authors Rebecca Hamilton, Heather Marie Adkins, is the first installment in the authors Shadow of Salem series. As the story opens, protagonist Brooke Chandler is temporarily moving from Chicago, a town infested with Vampires, to Salem to find out the truth about what happened to her fiance Tom Garrison. Garrison was supposed to be investigating kids missing from a local orphanage where Tom grew up. The case is now cold but with her secret psychometric skills and relentless drive for justice, Brooke figures she might be able to solve it where no one else could.

Unfortunately, she slowly discovers that Salem is not like her hometown Chicago and not everything is as it seems. Before she knows it she's stumbled upon a supernatural plot and become tangled with some of the more powerful supes in Salem. Brooke, who is described as having silver hair and purple eyes, is soon recognized by Lord Tremaine who claims he holds a grief against her for something she apparently did in the past. Tremaine is something ancient, and dangerous. While Brooke has the ability to see into the past by touching inanimate objects, Tremaine can apparently remove memories and wipe entire places from existence.

Someone, maybe Tremaine, is wiping out all memories of what happened to Tom. What are they hiding and how far will they go to prevent Brooke from uncovering the truth about Tom as well as the truth about who she really is? Even though her "Uncle Oscar" trained her, it becomes highly apparent that Brooke may be out of her league. If Tremaine doesn't get to her first, others may do it for him. Can Brooke and Tremaine put their angst aside and work together to fight the evil that is growing in Salem, or will it be Brooke's swan song? Several unexpected twists and turns occur leading Brooke to a truth that just maybe to hard to bear. Old family truths and a possible romantic past come to light as well.