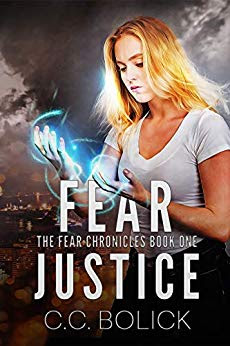 After her father is kidnapped, Rena can't trust anyone, especially not the agent who saves her. If only she knew his real mission is to unlock her power... Seventeen-year-old Rena Mason counts the days until she can leave for college. Every night her father drinks himself to sleep, leaving her to care for her younger brother. When her father is kidnapped by terrorists, her dreams of freedom become a nightmare.

Stunned that her father has a history with these terrorists, Rena knows she must run or be their next victim. She learns the tough guy at school has a reason to look after her - he's working for a government agency with the same goal as the terrorists: find a woman who disappeared eighteen years ago. Time is running out since only this woman's special gift can save the world from a looming nuclear attack.

Rena can't trust anyone, especially not the stone-cold agent she's falling for. Can they save the world before Rena's feelings trap her in an agent's fight for justice?

Fear Justice contains elements of fantasy, sci-fi, and paranormal. It's the first book in an exciting new series called The Fear Chronicles.

Fear Justice is the first book in The Fear Chronicles series by author C.C. Bolick that combines sci-fi and fantasy. In the Prologue, CC establishes the back story for the series second main character Travis Payne who works for a secretive organization that is supposed to protect US citizens from people with powers. People like Travis who have the powers of teleportation. Readers also learn that a woman named Rosanna, who disappeared 18 years ago, might actually be alive. Why should we care you cask? Continue reading. Rosanna, called Fire Bird, had the power to stop nuclear bombs.

She could also start a nuclear explosion. We're also introduced to Donald Mason who just happens to be Rena's father. Mason, who resigned 18 years ago, was assigned to protect Rosanna. His partner, Travis' father, has been missing for years and Travis hasn't stopped looking for him. Mason is the only one who holds the answer to what happened. Since then, Mason married, had a child and that woman apparently died in a car accident 3 years ago. Travis is ordered to find Rena Mason so that Director Sylvia Greene can discover if Rena has the same powers as Rosanna.

17 year old Regina (Rena) Mason is having a hard time looking after her sibling (Alfie) after her father resorted to drinking himself to sleep after Rena’s mother died a few years ago. Her father has some deep, dark secrets which he hasn't bothered sharing with Rena. Rena's father has enemies from before. Enemies like Black Dawn terrorist Louis Castillo who believes that Rosanna is alive. Rena is told to run with her brother to Atlanta if he disappears. Instead, she and newly arrived Travis Payne find themselves running from Castillo's people.

Rena discovers that Rosanna was her mother. Her mother, like Rena herself, had the same ability to stop a nuclear bomb or cause one to explode. Rena is exposed to the Agency and Sylvia who are the worlds first line of defense against people who have powers that could harm others. Rena's powers only work when she's afraid. The problem is that Rena doesn't fear anything. Literally, you can drop her off a cliff and she doesn't show any fear. The only way to release her powers is to find a way to feel. With Louis on the fringes wanting Rena like he wanted her mother, Rena will have to learn who she can trust and who is just using her powers.

This series is full of possibilities with genuine characters, special powers, a solid mystery, and a good basis for more stories. Plenty of action and suspense. I've already read the second installment in this series while waiting for Fear Darkness to release shortly.