#Review - When You See Me by Lisa Gardner #Thrillers #Suspense 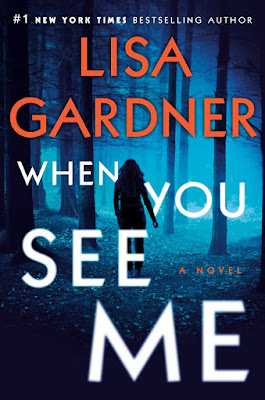 #1 New York Times bestselling author Lisa Gardner unites three of her most beloved characters—Detective D.D. Warren, Flora Dane, and Kimberly Quincy—in a twisty new thriller, as they investigate a mysterious murder from the past…that points to a dangerous and chilling present-day crime.

FBI Special Agent Kimberly Quincy and Sergeant Detective DD Warren have built a task force to follow the digital bread crumbs left behind by deceased serial kidnapper Jacob Ness. When a disturbing piece of evidence is discovered in the hills of Georgia, they bring Flora Dane and true-crime savant Keith Edgar to a small town where something seems to be deeply wrong. What at first seems like a Gothic eeriness soon hardens into something much more sinister…and they discover that for all the evil Jacob committed while alive, his worst secret is still to be revealed. Quincy and DD must summon their considerable skills and experience to crack the most disturbing case of their careers—and Flora must face her own past directly in the hope of saving others.

When You See Me is the Eleventh book in Lisa Gardner’s series featuring Boston Sergeant Detective D.D. Warren. The story starts off with two hikers discovering human bones. After findings uncover that the remains are approximately 15 years old, the question becomes could this female be another victim of predator Jacob Ness who investigators have never found the cabin in the woods? FBI Special Agent Kimberly Quincy quickly puts together a task force after the remains where found in the mountains of Georgia. It should be noted that a good majority of this story is set in small towns in Georgia.

For the first time, 3 fan favorites are brought together to solve a series of killings. Sergeant Detective D.D. Warren and victim-turned-avenger Flora Dane head to the mountains of Georgia to team up with Quincy who believes the victim may have been killed by Jacob Ness who held Flora for 472 days before she escaped. Quincy and Flora are connected in that she found Flora after she broke her connection to Ness. Flora has become something of a victim's advocate as well as a confidential informant for D.D. who is slowly coming to actually like Flora even after some of the things she's done.

Flora recently found a connection with Keith Edgar, who is a computer guru and someone who knows all too well about Jacob's dark past. As the number of bodies are uncovered by the task force grows, it becomes clear that Ness isn't the only serial killer who preyed in this area. A new monster has emerged and created a sinister criminal enterprise of human trafficking, illegal organ harvesting, and murder. With the help of a young, mute girl D.D. calls Bonita (who has been scared for life thanks to the bad man). DD, Flora and Kimberly discover that small towns can really hide some big secrets. Secrets that people will literally kill to protect.

As usual, Gardner does fantastic research to make her story more realistic. There was a small part of this story towards the end where a bit of supernatural is thrown into the story. It all surrounds around the girl named Bonita who really broke my heart learning what happened to her mother, and how she was used like trash. You will still need to suspend some disbelief while reading this one, but I didn't mind and I don't think anyone else will either.