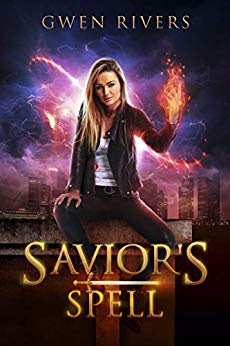 New York is under attack from sinister forces. To save the city, she must give her life…


Emma Slade burns for revenge and excels at kicking butt. At least human butt. But the fiends who murdered her family hopelessly outnumber the half-fae orphan. And the handsome, brooding werewolf claiming he can help might send her instead to her death.

Liam Cooper is determined to locate the prophesied savior whose sacrifice will protect the realm. Prowling the Manhattan streets, he’s shocked when he encounters Emma and learns she’s his fated mate. But it breaks his heart when he learns she’s also the messiah he seeks.

Taken to the shifter’s compound, Emma trains with a mystic sword that has never lost a battle. But Liam grows increasingly anxious that fulfilling the prophecy will doom the woman he loves.

Can the two heroes pull off a miracle and twist a terrible destiny?

“Now in their darkest hour, One shall rise who wields the power, To resurrect what has been lost, Magic bought at a terrible cost. Blood of the children, his to spill, As they abandon Underhill. ‘Til the sword does appear, All the fae will live in fear, What can’t be replaced, she must give, So the forever young might live.”

Savior's Spell, by author Gwen Rivers, is the first installment in the authors Spellcaster series. Emma Slade is freshly arrived in New York City. She has purple and gold glyph's and is hunting those who killed her mother and brother. Emma is a spell caster who is 1/2 fae and 1/2 human. She has a 6th sense for human emotions as well as access to elemental magic. She also has the unique ability to ignore any royal commands. Emma first friend she makes is Keisha aka Rage who is a werewolf child hiding out in a close restaurant. Emma's encounter with Liam who changes everything.

As Alpha, Liam Cooper's job is to protect morals from the fae. He believes that no fae should be able to hurt any human. Liam actually gave his oath to one true queen. Liam's eyes are opened when he watches Emma protect a transitioning Dryad named Fiona from human fae haters. Liam's job is to put down any threats to the fae or his pack. What makes things even more complicated is that when his wolf sniffs out Emma, he immediately knows that she is his mate. Liam is ordered to find the Savior; spellcaster prophesied to sacrifice everything for the fae. When he discovers who Emma is, it's a game changer.

The two must work to find the sword of the Tuatha de Dannu which is said to be indestructible. Emma has spent 2 years hunting the dark fae but what she uncovers might make you a bit sick to your stomach. I'm all about outlawing incest in any from in any book written from here on out. The most curious character in this book is Keisha because she's so rare, nobody knows what to do with her. She's almost as powerful as Liam, but she makes some actual sane choices by not stepping on anyone's paw before she can prove herself to Liam's pack.

Thanks to not reading The Goodnight Kiss, I had no clue who Nic or Arden or Addison were. Apparently, this series is a spin-off from the Unseelie Court-series by Jennifer L. Hart (she changed the name for the genre). I don't think you have to read one or the other first in order to enjoy either series. You just have to be willing to suspend some aspects you hate from different things that are interspersed in this book and you'll be fine.