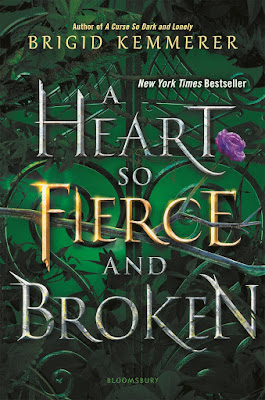 Brigid Kemmerer continues her bestselling fantasy series in another tale full of dark magic, new love, and a kingdom on the edge of ruin.

Find the heir, win the crown. The curse is finally broken, but Prince Rhen of Emberfall faces darker troubles still. Rumors circulate that he is not the true heir and that forbidden magic has been unleashed. Although Rhen has Harper by his side, his guardsman Grey is missing, leaving more questions than answers.

Win the crown, save the kingdom. Rumored to be the heir, Grey has been on the run since he destroyed Lilith. He has no desire to challenge Rhen—until Karis Luran once again threatens to take Emberfall by force. Her own daughter Lia Mara sees the flaws in her mother’s violent plan, but can she convince Grey to stand against Rhen, even for the good of Emberfall?

The compulsively readable saga continues as loyalties are tested and new love blooms in a kingdom on the brink of war.

A Heart So Fierce is the second installment in author Brigid Kemmerer's Cursebreakers series. While the first book in the series alternated between Rhen and Harper, this story alternates between Lia Mara (from the land of Syhl Shallow), and Grey, once commander of the Royal Guard of Emberfall under Rhen. As a timeline, this story takes place several months after the ending of A Curse So Dark and Lonely.

The nightmare curse has been broken. The people of Emberfall no longer have to feel terror from the monster unleashed every season. But, with rumors of a true heir who is also a magesmith spreading across the country, the people are questioning Rhen’s authority and Emberfall is on the brink of collapse and civil war. Rhen is determined to find this magesmith no matter the price and put an end to magic in Emberfall which has cause so much damage.

The book opens with Harper. Harper was the girl who broke the curse. Since then, she's been passed off as a Princess from Disi to send a message to Rhen's enemies that he has support from an unknown land. Her brother Jake, and his lover Noah, are also still in Emberfall wishing they could go home. Harper and Rhen don’t get too much story time in this book. They appear at the beginning of the story and the end when the culmination of the journey ends with a huge twist.

Grey has no intention of claiming the throne, so he chooses a life of hiding instead. With Rhen's army gaining traction with their hunt for the magesmith, Grey’s days in hiding are ending. At the same moment in time, 18-year old Lia Mara, her mother Karis Luran, and her 16-year old sister Nolla Verin, are headed to Emberfall to negotiate a truce between Rhen and Syhl Shallow. Karis, who has left a path of destruction far and wide, wants to conquer Emberfall by putting Rhen in a position he can't squirm his way out of.

She also wants to find Grey while replacing her daughter Nolla Verin with Harper in order to unite the countries. The alliance is rejected by Rhen but that doesn’t stop Lia from attempting a different approach. Even though Lia Mara is the eldest, she isn't heir to the crown. Nolla is. Lia is the book smart elder sister who has no power whatsoever nor does she have any say in what her mother or her sister, for that matter, does in regard to running the country. Lia Mara tries to peacefully negotiate with Rhen, he refuses to be fooled again and imprisons her. Lia Mara’s only hope for escape is to enlist the help of Grey.

Grey connects with a boy named Tycho who learns of Grey's secret but stands by Grey right till the end of the story. In fact, Tycho, along with Jake, and Noah, become centerpieces for Grey's staunchest supporters. Grey's unwillingness to destroy his own country, or his own brother for that matter, shows a whole lot of grit and determination. At any point in the story, Grey could have stepped forward and told Rhen, or Harper for that matter, who he was. But then we wouldn't have had this story, would we?

The ending of this book left me shattered. I do not see good things happening for Harper who I absolutely missed in this story. Harper, who has cerebral palsy, has never once let her condition slow her down. She put her faith in Rhen, and with his choice in the end, I don't see how she can walk away unscathed without returning to her own world. I also don't recognize Rhen. He's become someone I just can't like any longer. Yes, he has tough choices to make.

But, why risk the woman you claim to love? Lia isn't one to use a sword to get what she needs. She uses her mind, and her determination instead. The connection with Grey and Lia grows slowly. I think at first Grey respected her and then notices how she isn't a wilting flower that needs anyone's help. Part of the story does take place in Syhl Shallow. The rest of the story is Grey and Lia trying to stay one step ahead of Rhen and figuring out how to survive against Lia's mother.