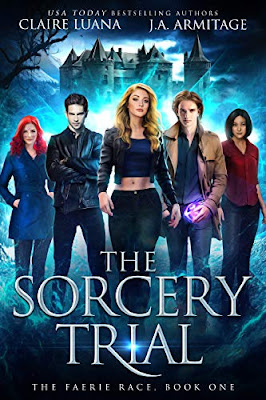 Fame. Fortune. Your most extravagant wish granted. These are the prizes promised to the team that wins The Faerie Race, the first and only reality television show to venture into the dangerous realm of the fae.

But that’s not why Jacqueline Cunningham wants in. She’s after any sign of her sister—who vanished without a trace into the faerie world two years ago. Jacq thought getting into the race would be the hard part. But she didn’t count on the other competitors—who will stop at nothing to finish first. Or her distractingly-handsome jerk of a partner, who seems to be hiding secrets of his own.
Plunged into a world where everything wants to kill her, what starts as a hunt for the truth turns into a desperate contest for survival. Now that Jacq’s in the race, it will take all her wits to make it to the finish line alive.

The Sorcery Trial is the first installment in co-authors Claire Luana and J.A. Armitage's The Faerie Race trilogy. What you need to know; the protagonist of this story is Jacqueline (Jacq) Cunningham. 10 years ago, the existence of the fae and the faerie realm was revealed. The ICCF (International Coalition for Cooperation with Faeries) was created. 2 years ago, her older sister Cassandra disappeared without a trace. Jacq to this day believes that she went over the hedge into Faerwild, the home of the fairy. Jacq believes Cass was last seen with a Fae, but has no proof since everything seems to have been covered over.

Soon after losing her sister, Jacq, traveled to Hollyweird where she is an aspiring stuntwoman. Until then, she is a gopher, the lowest monkey in Hollyweird working for a boss obsessed with finding the next great Hollyweird blockbuster. Jacq soon learns that there's going to be a race called "The Fantastic Faerie Race" sponsored by the Faerie King himself, Vale Obanstone. The King offers the winner of the contestant a magical boon. If you are thinking the Amazing Race, you would be correct. Except that this contest takes place in Faerwild. There will be a total of 12 contestants; 6 men, 6 women, 6 humans, 6 fae.

One of the fae competing is the King's own son Tristam who Jacq literally bumps into. During preparation for the contest, Jacq watches a contestant fall and nearly get eaten by a crocodile. She chooses to intervene on the racers behalf which gets her fired from her job. But, the press she gets from her action in saving the contestant gains her an entry into the competition.  Something Jacq has been hoping for. She's never given up on finding her sister and this might be her one chance to do so. Skipping ahead to the contest, Jacq, weary of magic ever since her sister Cass disappeared, is teamed up with Orin, a fae who has his own hopes in winning the contest.

The land of Faerie is a dangerous and beautiful place. Jacq & Orin have to work together not only to win, but to make it out alive. They also have a cameraman following their every movement. Jacq, who does well on the physical challenges, must figure out a way to make her dormant work, especially since the other contestants are treating this contest as though they are in the Hunger Games. Sorry, not sorry, but that's the fact of the story. You have to face tough challenges while uncovering various clues while also avoiding being put into dangerous situations.

So, this story has been compared to Hunger Games, The Amazing Race, as well as American Gladiator. Fair comparisons. I look forward to the second installment and have already downloaded it. I need to figure out some of the background stories like who the Brotherhood is, why contestants end up dead, and what Cass is really up to that she couldn't contact her own sister to tell her that she's alive or not.