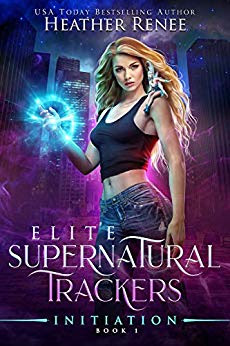 A supernatural prison, a feisty fairy sidekick, and four alpha males. What could possibly go wrong?

Being sent to prison just after my eighteenth birthday wasn't exactly what I had in mind after getting my first taste of freedom. Neither was ending up in cell block B with all male prisoners. There had to be some sort of mixup, right? Wrong.

After a too-close-for-comfort attack, I'm taken in by the Fabled Four--a group of guys who aren't known for playing by the rules and are prisoners here just like me. The only difference is they know what the warden wants from them and I have no idea.

Much to their leader's dismay, it's time to figure out the real reason I'm stuck in Mandora Supernatural Prison. Though, if I can't get my magic in check sooner rather than later, I just might get myself, or others I care about, killed.

*Please note, this is not a Reverse Harem book and recommended for ages 16+ due to some bully themes and language*

Initiation, by Heather Renee, is the first installment in the authors Elite Supernatural Trackers series. Protagonist Cara Simmons is accused of breaking witch law on 4 separate occasions as the story opens. She is quickly sent to Mandora Supernatural Prison where Warden Gillian puts her in with the male population. This triggers warning alarms. The Warden quickly ignores any requests by Cara to be told which laws she supposedly broke. She is told by her new cell mate, Anthony, do not challenge the so called Fable Four and other rules that she needs to pay attention to.

Cara quickly destroys that rule within hours with her snarky, care less, try to stop me if you dare attitude. Cara is supposed to be some weak witch with little powers who was orphaned when her parents died 8 years ago. Dad was "supposedly" a sorcerer, while her mom was a witch. But, the Four easily uncover that Cara is more than she claims to be. The Four are Hawk, Gunner, Ace, and Yeti. Cara is soon called Siren. Gunner claims the Warden wants Cara's powers. Yeti claims that Cara is a mixed Siren/Witch who can manipulate people into doing her bidding. ::Que the light bulb::

The Four work for the warden as trackers. They tend to mess with the other prisoners because they can and nobody has been able to stop them since they arrived. When Cara's fiery ways get noticed by the Four, she's put under their protection. Not only from the other inmates, but the guards and the Warden as well. The Warden has kept track of Cara. He knows that she doesn't play well with others. He orders her to tame the fabled four if she has any hopes of leaving the prison any time soon.

(I recently wrote a review for another book where I said that I don't much care for reverse harem novels. Both authors say why choose when you can have 4? They also claim that neither book has anything to do with being reverse harems. We shall see!)

In this word, friends are a liability unless they can offer you something in return. Cara wants to know why the Warden choose her. As the story continues, Cara actually gets stronger whereas others have their powers siphoned by the Warden. Cara and the Four are given a mission to St. Louis to find a trouble making Demon. Cara finds a fairy being named Nixie held hostage who quickly shows she's got as much of an attitude and sass as Cara does. One thing that you can grab hold of. There is more too Jaxon than meets the eyes. The Supernatural world is extremely corrupt. And, Cara has to walk a tightrope between helping Nixie and the Four, to uncovering what she is actually capable of.