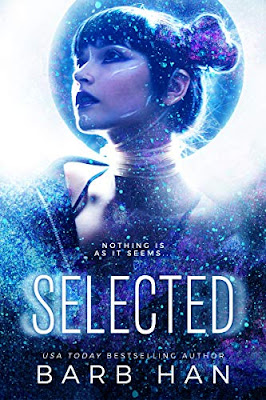 After a polarized nation was broken by the threat of civil war, States have now become countries. And in New Maine, things have gotten worse.

Giving my family a better life is everything. And my selection to attend an elite prep school suddenly offers my family a dramatically different life—food on the table, a roof over their heads, and a fighting chance at a future.

Everything is going great until some of my friends begin ghosting me, and then disappear. Soon it becomes clear this “chance of a lifetime” isn’t the Holy Grail I was promised. And the attention from one of Easton’s elite has me questioning why a boy with a golden future wants to risk it by being seen with me.

But when I find out why I’m really at this school, I may have to trust him if I want to live.

Barb Han's Selected is a young adult, Dystopian, with elements of mystery and suspense thrown in. What you need to know: The year is 2040, the USA no longer exists due to diabolical author shenanigans which has separated states into individual countries called COA, countries of America. Maine used to be a state until the USA became too big, too polarized. Nothing got done and civil unrest was on the rise. In order to avoid another civil war, the federal government was phased out, and control moved back to each state.

Tori was selected to attend a private elite school called Easton. Easton is separated into (5) groups of students: Cerebrals, Athletes, Tech Nerds, Legacy Kids, and Sponsored. Toni is a sponsored student who has been given the opportunity to prove she's worth the time and effort the Council has chosen to reap on her and her family. Tori, who was selected for dance, is at the top of her class. Selected students are required to attend therapy sessions, have regimented food, maintain high grades, and dance well in competitions. Oh, and they are monitored 24/7/365 with security and drones.

Tori's only real friends are Adalynn Waters, and Jaxon Donovan a so called tech nerd. Tori is sponsored at Easton by a couple named Chaffee. They pretty much control her life here at Easton while showing too much interest in her brother Trevor. But, things aren't so perfect at the school. Students tend to disappear, Jax and Adalynn suddenly get cold towards Tori, while Caius Fitch, a Legacy, takes a keen interest in her which causes bullies to target her. Her dance performance goes wrong after she learns her brother may have killed someone, and now she suddenly has leprosy.

Tori goes on a mission to find out what really happened to her brother, and the missing sponsored as well. The villains of this story are right in front of your face. From the couple who sponsors her, to the Councilwoman Synder who has an agenda when it comes to Tori, to the bullies in the school who don't believe she belongs in their elite school. Tori's only allies are definitely Caius who goes through his own living hell at the expense of the villains, but a very interesting group of rebels who have seen the dark side, and they don't much care to stick around and follow protocols.

As a wrap-up, Tori is a very intelligent, complex, artistic, creative young woman who is put into a very bad situation by very twisted and villainous people. This shouldn't come to a surprise to anyone, but this isn't anything new in this genre. This is a clean romance novel. There's a connect between Tori and Caius, but nothing goes horizontally. This is a dark book which surprises me considering it's geared to Teens and Young Adult.

This is also not a standalone although you won't find any information on the author's web page about future installments. How do I know? Because there is a brief appearance by Tori's twin brother Trevor in the Epilogue. Why would you introduce Trevor if this were a standalone? I would ask the publisher to please, please, please follow up on this and enlighten future readers to any and all sequels which are sure to come. Thank you.