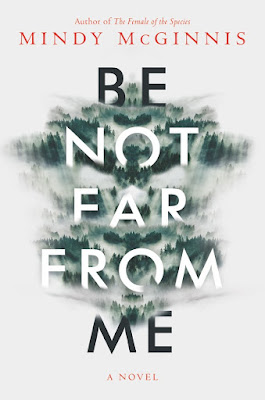 
Hatchet meets Wild in this stunning contemporary YA novel from Edgar Award–winning author Mindy McGinnis, a compelling and harrowing story about one girl’s attempt to survive the impossible after she gets lost in the Smoky Mountains.

The world is not tame. Ashley knows this truth deep in her bones, more at home with trees overhead than a roof. So when she goes hiking in the Smokies with her friends for a night of partying, the falling dark and creaking trees are second nature to her. But people are not tame either. And when Ashley catches her boyfriend with another girl, drunken rage sends her running into the night, stopped only by a nasty fall into a ravine. Morning brings the realization that she’s alone—and far off trail.

Lost in undisturbed forest and with nothing but the clothes on her back, Ashley must figure out how to survive, putting into practice all the tricks she learned from Davey Beet, her childhood crush and summer camp counselor. But she can’t outrun the red streak of infection that’s creeping up her leg—or the fear of another truth. Years before, Davey’s own broken heart sent him into these woods . . . and he never came out. How can Ashley expect to survive?

Mindy McGinnis' Be Not Far From Me is an emotional book about surviving the wilderness, but also surviving life and learning from past experiences. 17-year old Ashley Hawkins is out with her friends on one final summer party before school starts in the fall. But, after she catches her supposed boy friend, Duke, with another girl, Ashley decides to run off into the woods without her shoes or her backpack and without telling anyone where she's going.

Ashley spent her childhood with her dad after her mom left for no explained reason. She struggles to come to terms with her guilt for the loss, and builds a tough outer shell because of it. She and her dad are not well off, but make the most of what they have. He introduces her to the wild, and she never looks back. Ashley's one bright spot was the days she spent at summer camp where she meets Davey Beet who, in reality, taught her how to survive what she does through in this story.

A series of unfortunate events causes her to fall into a ravine, crushing her foot but not her spirit. She uses what she has learned over the years to not only take care of herself, but to attempt to find her way to civilization, and along the way, she learns more and more about the woman she is becoming, and the things that have happened in her life to make her that way. Ashley goes through some harrowing trials, but she keeps going. It's inspiring in such an unexpected way. The chapters are written in a day to day format, so at the beginning they are much longer, whereas once time has taken its toll, there are some instances where a chapter may only be a paragraph.

I think there's a duality of messages in this story. First, don't rush off into the woods without being prepared for what you might expect. Even her friend Davey didn't bumble his way into the woods. He went prepared. Second, hold onto your faith and your emotions. Ashley let's her drunken emotions get the best of her and almost dies in the process. Conveniently, Ashley also finds things she needs the most almost as though someone put them there for her in her time of need.  Fair warning though, this book contained mostly inner narration and flashbacks to Ashley's unique childhood.