#Review - Witches of Ash and Ruin by E. Latimer #Fantasy 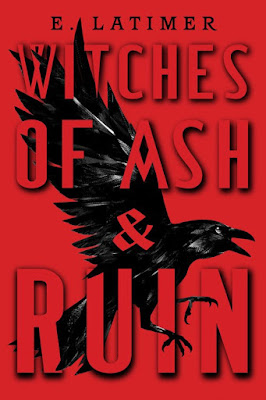 Modern witchcraft blends with ancient Celtic mythology in an epic clash of witches and gods, perfect for fans of V.E. Schwab's Shades of Magic trilogy and CHILLING ADVENTURES OF SABRINA.


Seventeen-year-old Dayna Walsh is struggling to cope with her somatic OCD; the aftermath of being outed as bisexual in her conservative Irish town; and the return of her long-absent mother, who barely seems like a parent. But all that really matters to her is ascending and finally, finally becoming a full witch-plans that are complicated when another coven, rumored to have a sordid history with black magic, arrives in town with premonitions of death. Dayna immediately finds herself at odds with the bewitchingly frustrating Meiner King, the granddaughter of their coven leader.

And then a witch turns up murdered at a local sacred site, along with the blood symbol of the Butcher of Manchester-an infamous serial killer whose trail has long gone cold. The killer's motives are enmeshed in a complex web of witches and gods, and Dayna and Meiner soon find themselves at the center of it all. If they don't stop the Butcher, one of them will be next.

With razor-sharp prose and achingly real characters, E. Latimer crafts a sweeping, mesmerizing story of dark magic and brutal mythology set against a backdrop of contemporary Ireland that's impossible to put down.

E. Latimer's Witches of Ash and Ruin tells the tale of 17-year old Dayna Walsh and those around her as a serial killer enters her peaceful small town of Carman, Ireland and creates chaos. Dayna is a witch and so is her friend Reagan who apparently has two mothers. Dayna is the daughter of a local reverend. She recently ended a relationship with Samuel after her sexuality was forcibly outed. On top of that, her absent mother Fiona returns looking worse than when she left and she struggles to also deal with OCD.

To top that off, Dayna actually fears that her father will send her away to camp now that her secret has been revealed. I think the relationship between Dayna and her parents could have been sussed out more than it is. The Reverend is like a dark figure in the background who may or may not have his own secrets that could severely affect Dayna. Dayna spends most of her time with Reagan which seemingly doesn't bother the good reverend until something bad happens. Dana's coven mates are more supportive and more of a family than the Reverend or Fiona.

Meanwhile, Meiner King, Grandma King, and Cora Whelan arrive in town to help Dayna's coven deal with the killer. Between Meiner & Cora, there's a power struggle over who will lead the coven after Grandma King dies. Grandma has been keeping some secrets. Secrets that play right into the killer's hands. Dayna and Meiner have a hate to love relationship when they first meet which slowly becomes a friendship and perhaps more. This novel is a dark, modern take on witches, blended with ancient Celtic mythology.

One thing that may trip up some readers is all the points of view. There are five: Dayna, Meiner, Cora, Dubh, and Samuel. Samuel's was the perhaps the unnecessary one as he brought nothing to the story and disappears when most of the action takes place, Dubh's is the darkest for reasons you can figure out yourself. While Latimer takes time to build each character, the two characters that shine through the most are Dayna and Meiner. Both break hearts and infuriate in equal measure.

Latimer does not shy away from the murders, and though there are a few disturbing/gory moments, it is never written in a “shock value” way. The story ends on a cliffhanger, which also isn't a good thing, especially since there's nothing to indicate that this was supposed to be part of a series. A note for publishers and authors. You should definitely tell interested readers whether or not this is a standalone or part of a series. You definitely lost a rating from me because of it.

The best way to hunt a witch was to look for patterns of three.

Three stones set into a wild, overgrown path. Three chimneys sending twisting ribbons of smoke into a clear sky. Three gates before the inner sanctuary—each more heavily spelled than the last. Find the house of threes, and you’d find the coven.

Dubh had traveled for days. In fact, he’d almost driven past the place. His tourist map was filled with colorful pins at every stopover—Kiss the Blarney Stone! Visit the Irish National Heritage Park!—but this miserable little village didn’t warrant a mention. He’d blown past the welcome sign without a glance, almost continuing into County Wexford. Almost. Something had pulled at his insides as he’d reached the village limits, tugging painfully at his guts. He’d turned the rental car around and followed the sensation down a rambling back road that twisted endlessly through green fields, leading him to this driveway in the woods. And there it was. A farmhouse with three crooked chimneys, windows shuttered against the dark forest.

The power rolled off this house in waves. It raised the hairs on the back of his neck and sent goose bumps up both arms.

These witches would give him the first real fight in years.

He ran his tongue along the inside of his teeth, feeling the jagged edge of his right canine.
In a few weeks he’d return. Push his way through the middle gate, the one with the black iron that curved into sharp fangs at the top. Something to look forward to, to make the days go by faster.

He always saved the best for last.