#Review - Of Flame and Fury by Cecy Robson #Paranormal #Romance 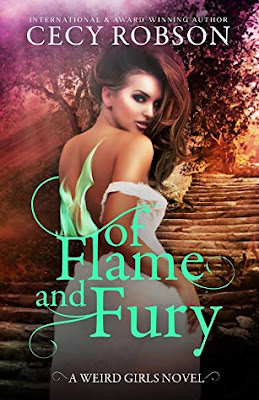 Taran Wird, the loudmouth mistress of flame and lightning, didn’t want to attend the formal gathering of the supernatural elite. She did so only to help unite the supreme beings in attendance in one common goal: protecting Taran’s sister, Celia.

Celia is pregnant with alpha werewolf Aric Connor’s child, the same child prophesied to save the world from uprising evil. Evil wants this child dead before he is born and, more importantly, before he can grow strong enough to stop it.

Taran and her werewolf lover, Gemini, put plans in place to protect Celia. Master Vampire Misha Aleksandr and his clan also swear their allegiance to Celia and vow to keep her from harm. The witches even cast protection spells around the manor to curse anyone with malintent who enters. Nothing was supposed to go wrong, except everything did.

Creatures that shouldn’t exist stalk the grounds and invade the premises, and every curse meant to shield the guests turns against them. No one counted on the powerful being who arrived uninvited. But he’s here, manipulating the magic enclosing the estate to work in his favor.

As body counts rise and allies become enemies, chances are Celia won’t survive the night. But evil never counted on how hard Taran Wird would fight, even at the expense of her life.

Of Flame and Fury is the third installment in author Cecy Robson's Weird Girls: Flame trilogy. This is technically the 9th installment in the Weird Girls universe but the final installment with Taran Wird as the main character. Cursed by a spell meant to destroy them, Taran and her sisters Celia, Shayna & Emme, developed unique magical talents. With the power of fire and lightning literally at her fingertips, Taran doesn’t fear much. Taran also has a zombie arm which has a mind of its own. Her mate is Tomo (Gemini) Hamamatsu, a were who has the unusual ability of splitting into (2) wolves.

At the beginning of this story, a Hodge podge of supernaturals from the Alliance--Vampires, Werewolves & Witches from around the world--have traveled to Genevieve's magical fortress to find ways to work together to save Taran's eldest sister Celia and her unborn baby from being wiped out. Celia is pregnant with alpha werewolf Aric Connor’s child, the same child prophesied to save the world from uprising evil. Evil wants this child dead before he is born and, more importantly, before he can grow strong enough to stop it.

Master Vampire Misha Aleksandr and his clan have sworn their allegiance to Celia and vow to keep her from harm. Uri, Master of all Vampires, as well as Ileana Vodianova, the sole female master vampire, are also in attendance but whose side they are on, is impossible to tell. A fortress that was supposed to be impregnable, has been compromised thanks to betrayal. Creatures that have never been seen before called Nytes go on the attack with dire consequences for many, many possible allies of Celia & Aric. If you've read Of Flame and Fate, you've already been introduced to the villain; Johnny Fate and what he is capable of. Of so you thought.

No one counted on the powerful being able to manipulate the magic enclosing the estate to work in his favor. As body counts rise and allies become enemies, chances are Celia won’t survive the night unless a miracle happens. That miracle is Taran Wird and her ability to do what needs to be done even if if means her death. Taran doesn't give a crap what most people think about her.  She curses like a sailor, dresses like a Hollywood vixen, wears high heels on all occasions, including being chased by vampires, and her right arm is a combination of new and old magic.

She gives out as best as she gets and has come to be respected by more people than not. I enjoyed how much Taran grows as a character in this book. She takes charge, kicks ass, and still has time for some romance with Gemini. She's the only one who actually understands that there is dark magic at work that is slowly eliminating allies of the Alliance which was formed to keep Celia alive. Author Cecy Robson really ups her game in this story. The action is wild and almost non-stop. There's plenty of bloodshed and violence but a bit of hope as well.

One of the most interesting characters in this story might as well be Destiny who carries the unique ability to predict the future and manipulate magic. Born of two witches, Destiny is revered among the supernatural elite for her acute ability to predict the future. Her biggest prophecy involves Taran’s sister, Celia, whom Destiny decreed will bear children strong enough to take on the evil that’s rising. Unfortunately for everyone, she couldn't see what would happen next.

Let me finish by saying this; READ THESE BOOKS. IN ORDER! DO NOT SKIP ANY! There has been plenty of adventures for the sisters and their allies. There's plenty to come as the author plans to continue this series by featuring Shayna, who is married to Alpha Warrior Koda, and Emme, the youngest sister who may or may not have feelings for Bren, a werewolf who was once rogue. I am actually looking forward to Emme's story to uncover what is really happening with her and maybe Bren?

P.S. - I could legitimately rate this book with 5 stars it was that freaking good!