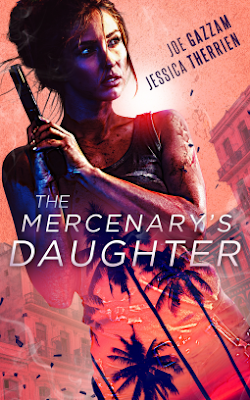 
When Special Ops recruit, Tara Kafee is dishonorably discharged, there’s only one place to go—Home.

But there’s more waiting for her there than she’s ready for.

It’s been four years since she’s been back and ten since her mother walked out on the family never to be heard of again. She’s determined to rekindle things with her father and keep him close. That is, until he goes missing.

Soon after stumbling upon a safe room full of weapons, fake passports, and a mission’s dossier marking a target in Cuba, she reluctantly accepts the help of her angsty teenage brother. He’s the only one she can trust, so together, the two set out for Havana.

Tara is determined to get her father back, whatever it takes, but things are never easy when you’re the mercenary’s daughter.

"People live and die. But as long as they do both things with purpose, there's never much to regret."

The Mercenary's Daughter is written by co-authors Jessica Therrien and Joe Gazzam. It is a spy thriller with a touch of romance thrown in. The story follows Tara Kafee, a former Special Ops Marine who was dishonorably discharged from the military for reasons that need to be cleared up. When she returns home to Miami, Florida, she has to deal with the attitude of her younger brother, Mitch, the strange disappearance of her father, Harry, who was also in the military, as well as uncovering secrets about Harry that has been kept secret for who knows how long.

After getting word that Harry is dead, Tara and Mitch are not too happy about the explanation that is given. Soon after stumbling upon a safe room full of weapons, fake passports, and a mission’s dossier marking a target in Cuba, the truth is revealed. It appears that Harry went on a retrieval mission to Cuba and was captured. Apparently, Harry is what's called an extractor who gets called upon when someone too extreme and off the books needs to be brought back to the States to face justice. These so called sensitive ops are formed to help maintain deniability. So, again, something went wrong, Harry was caught, and now he's disavowed by everyone.

Tara reluctantly accepts the help of her angsty teenage brother who has been holding hatred for his sister inside for the years she was in the military. Mitch is the only one she can trust, which means that Tara and Mitch have to put together a plan on the fly, invade Cuba with a stolen boat, find Harry, not get captured or killed, and bring him home. Most of this story takes place in Havana, Cuba while the rest takes place in and around Florida including Key West.

Upon arriving in Havana, Tara and Mitch have to find Harry's contact which ends up being Andy who very much wants to get the hell out of Cuba. Tara, Andy, & Mitch face corrupt cops, arms dealers, drug kingpins, and all sorts of danger while using cable cars, zip lines, scuba gear and one beauty of a 1955 Chevy Bel Air as transportation. Yes, one absolutely needs to suspend belief while reading this book. You have to suspend belief that Tara, while trained as a Special ops soldier, and her brother who is a science prodigy, will work together after years of antagonism between the two of them to help their father come home. You have to have an idea that Tara is trying to find what she is supposed to do with her life now that she doesn't have the military after she, well, nah, no spoilers.

The problem I have with this story is the ending. First, the publisher doesn't tell the reader whether or not this is part of a series or not. Second, the authors leave a huge, shocking, head scratching cliffhanger ending which apparently means there needs to be a sequel in order to find out what happens next. So, we shall see what we shall see when it comes to an actual sequel and whether or not it will be released.