#Review - The Court of Miracles by Kester Grant #YA #Historical #Fantasy 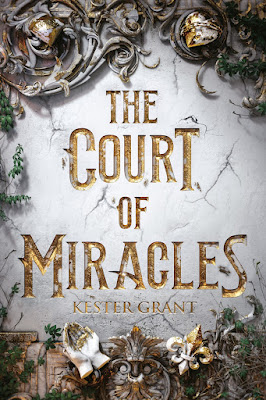 Les Misérables meets Six of Crows in this page-turning adventure as a young thief finds herself going head to head with leaders of Paris’s criminal underground in the wake of the French Revolution.

In the violent urban jungle of an alternate 1828 Paris, the French Revolution has failed and the city is divided between merciless royalty and nine underworld criminal guilds, known as the Court of Miracles. Eponine (Nina) Thénardier is a talented cat burglar and member of the Thieves Guild. Nina’s life is midnight robberies, avoiding her father’s fists, and watching over her naïve adopted sister, Cosette (Ettie). When Ettie attracts the eye of the Tiger—the ruthless lord of the Guild of Flesh—Nina is caught in a desperate race to keep the younger girl safe. Her vow takes her from the city’s dark underbelly to the glittering court of Louis XVII. And it also forces Nina to make a terrible choice—protect Ettie and set off a brutal war between the guilds, or forever lose her sister to the Tiger.

The Courts of Miracles is the first installment in debut author Kester Grant's Young Adult Historical Fantasy trilogy. In an alternate Paris in the wake of a failed revolution, one girl will rise through the ranks of a dangerous underground society to protect those she loves—and right a system of ruthless control that holds the City of Lights in its grasp. This story focuses the progression of Eponine (Nina) Thénardier from 1823 until around 1829.

This is about the Court of Miracles which has 9 separate arms: Guild(s) of Gamblers, Assassins, Beggers, Mercenaries, Smugglers, Letters, Thieves, Flesh, and Dreamers. Wretched is the name given to all children of the Court. Nina's father is a thief who trained his daughter to follow in his footsteps. However, after he sells his oldest daughter Azelma to the swarmy Guild of Flesh master, Nina takes a serious challenge.

She's to enter a near impossible place to break into in order to steal something valuable from someone who is supposed to be untouchable. Nina soon becomes The Black Cat and a full member of the Guild of Thieves with skills that may exceed her sperm donor and her new father. After trying and failing to save her sister, several years go by before she meets Cosette (Ettie) who she takes under her wing. Unfortunately, the dreaded Master of Flesh has set his eyes on Ettie, and Nina will have to figure out a plan to keep her safe or lose yet another sister to the man who cares not one bit for women.

He keeps all his prize possessions drugged out of their minds. Nina's personal war on Lord Kaplan plays out in a 4 part story. She meets a variety of curious characters like Tomasis, the Dauphin of France, Grantaine & St. Juste, as well as Montparnasse. One reviewer noted that it seems as though Nina found (3) different men to fall for her while not encouraging their affections. There are references to the original players like Robespierre, Marat, Danton, Mirabeau, DeMoulis, and St. Juste who were involved in the French Revolution.

In a nutshell, the story is more of a loose borrowing of the Les Misérables characters supporting the main player, original character like Jean Valjean, & Inspector Javert who in this book is the only female Inspector. Les Misérables literally means The Wretched, The Miserable Ones, The Poor Ones, The Wretched Poor, The Victims and The Dispossessed. The Court of Miracles actually focuses more on Nina's attempts at revenge and saving her sisters, than the original novel focused on Cosette whereas Éponine and Azelma were almost villainous in nature in comparison to this book.

Nina is ruthless at times, and I'm here to say that I was absolutely Ok with most of her choices. She knows what she wants, and she takes the steps to make it happen. She may be a thief, but she has a code, she recognizes what is wrong in the Court, and seeks to rectify it. That is what makes her formidable, the lengths at which she goes to save the people she loves, but also to bring down the Tiger and his ring of sex slavery. Ettie is such a curious character who apparently the entire underground of Paris wants to own her because of her beauty. She relies wholly and fully on Nina to save her life and provide the necessary guidance to keep her alive. She even makes alliances that are supposed to knee Ettie safe that will cost her numerous favors in return.

Marketed as a retelling of Les Misérables, this novel has limited references to it. Instead, it uses the classic tale by Victor Hugo and some of his characters to broach the similarity and plot devices. It’s a nice inside look at the workings of the Court and their counterparts. It’s a story of revenge and redemption, using the tried and proven formula of good vs. evil, the haves vs. the have nots. A plus for the entire world building throughout this story. It was absolutely phenomenal. You actually could feel yourself in this dark and dreary place. You could feel the pain and suffering of the children at the expense of the rich and those in charage of the individual Guilds. I am looking forward to the next books to see how the author progresses Nina and whether she will have time for any romance or not.