#Review - Where There Be Humans by Rebekah L. Purdy #YA #Fantasy 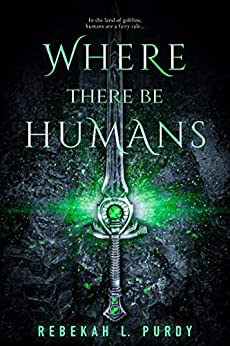 Sixteen-year-old Ivy Archer is arguably the best warrior-in-training Gob Hollow has ever seen. Yet everyone—except her best friend she suddenly has other feelings for—looks down on her because she's only half goblin, with no idea what the other half is. She’s always suspected it might be human.

But humans, she’s been told, aren’t real. They’re only creatures of myth.

When the prince of their kingdom is taken for ransom, it’s Ivy's big chance to prove her worth. And when she learns his captors are human, the rescue mission becomes personal. The stories were clearly wrong, and now she has a chance to find the truth about her lineage, as well. If she survives…

With a small band of warriors at her command, including her best friend turned crush that’s getting harder to hide, Ivy sets out to find the prince and her human family. But the answers lie within secrets and conspiracies that run far deeper than she ever imagined.

Where There Be Humans, by author Rebekah L. Purdy, follows 16-year old Ivy Archer as she journey's for clues to her heritage, and to save the boy who she respects. Ivy lives in a place called Gob Hollow where she's an outcast. She has no clue who her mother is since the truth has been kept from her. She believes that she's 1/2 human and 1/2 Goblin since her skin coloring and features are entirely different from everyone else. Even though she's one of the finest students and warriors in training of her age, but she's never taken seriously.

She's been told that humans are fictitious and don't exist. But, she knows otherwise because she's been doing her own research. Her only real friends are Pudge Wayfever and Prince Dorian. When King Starshooter decides it's time for a coming of age journey to the Outer Realm for the first time in 17 years, Ivy knows that this might be her best shot to prove to everyone, including her father, that she's more than qualified to take this dangerous journey and hold the Sword of Avarik. Unfortunately, and for other reasons I won't spoil, Prince Dorian is chosen instead.

Ivy knows that something happened 17 years ago when the King was a boy who traveled to the Outer Realm. There are a few people still alive who know the truth including her father and their cook. For Ivy, something surprising happens to her. She appears to have been chosen by the Goblin's Hag for some reason that won't become clear until much later in this story. It will also explain why she's so different from everyone else in Gob Hollow. With her father and cook being very secretive, Ivy feels as though she is being punished while everyone else can get away with whatever they want to.

In that regards, it is Dorian who is chosen to go on the quest after making his intention know that he plans to marry Ivy. But, when Dorian doesn't return after several months and appears to have been captured by Elves, there is only one choice as to who is going to bring him back: Ivy. As the truth about Ivy's tattoo's are revealed, Ivy becomes aware that she's been lied to her entire life. Also, since the Hag has chosen her, there is no way the King can refuse to allow her to go on this journey. She, and her best friend Pudge join the rescue attempt at bringing Dorian back home.

What they don't count on is discovering the truth about her heritage, the truth about humans, and a large conspiracy that could destroy Gob Hollow if someone doesn't step up. Ivy struggles mightily to remain calm in a constant storm of turmoil. She knows that there is only one person she can trust. Everyone else seems to have their own agenda and their subterfuge may encompass a large swath of Goblins. Ivy's time in the human world is brief by dangerous. She encounters hatred at the extreme level but also love from a woman who knew Ivy's mother. In the human world, Goblins are the ones who are thought to be fairy tales. Ivy also encounters new allies and her feelings for Pudge grow stronger and the danger gets more intense.

Overall, I really liked Ivy. I liked that she shows courage in the face of one dangerous situation after the other. I liked that Pudge wasn't shoved out of the way to make room for Ivy to fall in love with someone else. The ending is a bit on the predictable side but I'm satisfied overall with the story.