#Review - Sisters of the Perilous Heart by Sandra L. Vasher #YA #Fantasy #SyFy 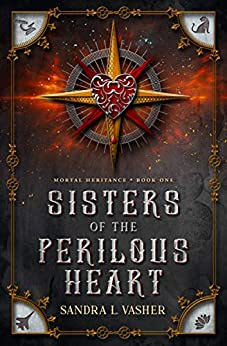 What would you do to save a sister?

As the last mortal kingdom of Kepler resists the Immortal Empire, its young queen faces a devastating attack. Queen Vivian is two minutes into her reign when an arrow pierces her heart and infects her with the Immortality Virus. But she has too much magic to become immortal and not enough to survive. She must find more magic fast, or she’ll die.

Meanwhile, another young mortal faces an uncertain future of her own. Carina is fleeing for her life, but her magic is a tracking beam for immortals. She must learn to harness and control it, or she’ll be captured and killed. Then she meets the queen of South Kepler.

Vivian needs Carina’s magic, and she can offer safe haven in exchange. But can Vivian trust this common girl? Carina isn’t on the kingdom’s registry of magicians. What if she’s a Northern rebel? A spy for the Immortal Empire? And will the truth be revealed in time to save them both?

Sisters of the Perilous Heart is the first installment in author Sandra L. Vasher's Mortal Heritance series. This story takes place on the planet of Kepler. The backstory is that once upon a time, scientists on Earth apparently discovered the Immortality Virus by combining HIV with Influenza. Now, I'm not a virologist, but this seems kind of absurd to me. But I digress. Even though the story primarily focuses on two separate young women, Queen Vivian Wellington and Carina Grace, you cannot ignore in-between chapters or the secondary characters.

2 minutes into her reign as Queen of the Southern Kingdom of Kepler, assassins target the new queen with an arrow infected with the Immortal Virus. Thanks to Vivian's magic, she's able to stay mortal and not turn into one of the Red Eyed Immortals who have no emotions except hatred for mortals. As her life fades, she and her bickering brothers (Bastian & Nathaniel) hunt desperately for the magic they need to cure the virus. Time is not on their side. If she tries to use her magic, she will die.

The Sisters of Novi Dupree make the best beer on planet Kepler, and 16-year-old Carina, who has lived with the Sisters since her parents died, only wants a taste of sassafras. But when her increasingly use of telekinetic magic lands her in trouble, she and Miguela are forced to flee the only place they felt safe. With the mysterious Max alongside, and the dangerous, immortal Red-Eyed Ones after her, Carina must figure out a way to stay under their radar until she can reach a safe destination.


There is a backstory to Carina and her sister as well. The sisters were smuggled to Novi Dupree by a stranger with a purple scar from his left ear to corner of his mouth. Nothing is known about this stranger or where he disappeared to until the sisters meet him again later in this story. The author is keeping this man's identity a secret for some reason. Maybe we will learn about it in the next installment. The question is also about the sisters who raised Carina and Miguela as well. Especially Sister Agda. I'm hoping to learn more.

It's fair to say that Vivian doesn't get enough of her own story to tell. She's always on the edge of scenes where it is her brothers who bicker and argue and attempt to keep her alive until they can find a cure for the virus. A Virus that nobody has seen before. She does have a curious romance with Captain Brandon Thurlow who is supposed to be protecting her. There are also questions as to those response for targeting Vivian in the first place. Was it her own mother, Constance, who seems to control the Southern Kingdom of Kepler? Or, the Immortal Empire who wants to take out the remaining Cardinal family?

Vivian and her brothers are all Cardinals. That means they are magic users blessed with three kind of magic. Telekinesis (they can move stuff), thermodynamics (they either control hot or cold), and a special ability unique to each individual. Vivian can see relationships between people in colored threads that bind people. Bastian can tell if someone is lying, and Nate talks to animals. The immortals are trying to eliminate anyone with magic because they don’t like people with magic and want to kill them all. Simple. Or is it?

When Vivian meets Carina, she sees an opportunity. Is this girl with too much magic someone she can trust? And can Carina trust Vivian? She's been busy enough trying to keep her sister safe and contending with Max who somehow carries a weapon that is supposed to be outlawed. Vivian is powerful, but she doesn't want to live as an Immortal. She'd rather die than turn into an unfeeling scourge. So, the question becomes, how much would you sacrifice to protect yourself and the ones you love the most?

Certain Mortals in the Cardinal families have strong abilities in telekinesis and either heat or cold, while most people have some mild telekinetic skill. Carina has a duality of magic that makes her run on the cold side. While Vivian knows everything about her powers, Carina knows almost nothing. She's been hidden from the world for her own protection and has been forbidden to use her magic. Yet, when push comes to shove, her magic may be the one thing to say her and her sister who also has magic but has kept it quite for fear of luring the Red Eyes to them.

This is a book that mixes fantasy with science fiction. The setting is very much like Earth but 4,000 years into the future. There are many unanswered questions left after you turn the final page. What will happen next for Bastian who seems so angry and so set on taking his anger out on everyone around him including Brandon? What is up with Nate? He's supposed to be the next in line for the throne, but he has lots of questions about whether he is strong enough. Can we really trust what happens to Carina in the end, or is this another rope a dope to lure readers into picking up the sequel to find out?