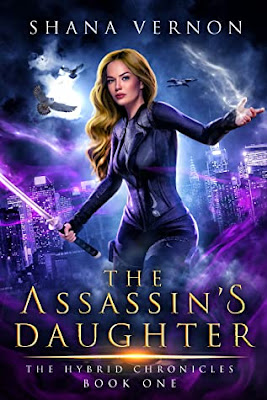 I've been hiding from the Guild since I was born.
If they knew about my magic, they would kill me in a heartbeat.

I should be avoiding them, but instead, I enter the Guild as a regular human recruit.

Papa went missing after a mission, and I need answers.

I realize I might have bitten off more than I can chew when my new instructor is the guy I kissed a few months before.

It doesn't seem like Cade recognizes me without my disguise, but if he does and blows the whistle, I'm as good as dead and so is Papa.

The Assassin's Daughter is the first installment in author Shana Vernon's The Hybrid Chronicles. Lenna Turgenov's father Alexei is an assassin who works for the Guild. The Guild is an ancient organization of assassins who accept contracts against the worst members of society. The humans or vampires the Government either won't or can't touch. But, Alexei's been missing for 14 days and the only person who may have any idea what became of him is the head of the Russian Brava, Maximus Chernov. Oh, and Maximus is also a powerful vampire.

After Lenna visits with Maximus who has been waiting for her to make an appearance, he tells her that Alexei was likely taken captive by a member of the Guild. That he probably found out information about key players within the Guild who are using the organization for their own nefarious gains. There's a twist to this story. Lenna is not supposed to exist. You see, one of the 6 rules that every assassin who works for the Guild is required to obey is, no children. There is also the fact that they don't want kids with special abilities running around. Abilities invisibility, shape-shifting, and healing.

So, Lenna, who is not supposed to exist, decides that she is going to bash her way into the Guild and find out what happened to her father. Entrance to the Guild requires you to kidnap a member and bring them to the Guild or by invitation. After Lenna's successful entrance, she's given a chance to become one of the newest (6) initiates. Each initiate is given a special concoction to drink that will brink out any latent abilities. Since Lenna was secretly trained by her father in all sorts of weapons and poisons, she has to keep a lower profile than her fellow initiates Axel, Ekon, Ryder, Hailey, Brielle, and Sofia.

But, when she encounters a boy that she's met before, her cover could be blown and her mission could quickly end even before it begins. There is also the fact that Lenna can't truly trust any of the Masters for fear they are involved in Alexei's disappearance. So, this book is a real quick read at only 195 pages. There is plenty of action during training. The ending kind of left a bad taste in my mouth because of the authors choices. The story also ends with a voice telling Lenna that they know exactly who she is. Who was that voice?

I'm going to go out on a limb and say I will likely read the sequel to this story. I need to find out about the so called Hybrids that this series is named after. I need to know what Lenna's relationship to Maximus really is and how far back it goes.