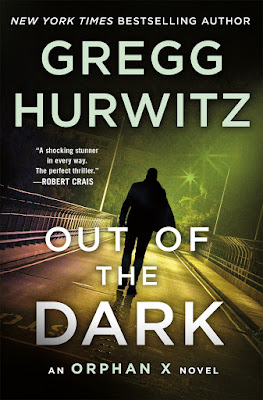 The next in the international bestselling Orphan X series, Evan Smoak takes on his most impossible target—while facing his deadliest opponent.

Taken from a group home at twelve, Evan Smoak was raised and trained as part of the Orphan program, an off-the-books operation designed to create deniable intelligence assets—i.e. assassins. Evan was Orphan X. He broke with the program, using everything he learned to disappear and reinvent himself as the Nowhere Man.

Someone, at the very highest level of government, has been trying to clean up the Orphan program but killing all the remaining orphans and their trainers. After Evan's mentor and the only father he ever knew was killed, he decided to strike back. His target is the man who started the Orphan program and who is now the most heavily guarded person in the world: the President of the United States.

But President Bennett knows that Orphan X is after him and, using weapons of his own, he's decided to counter-attack. Bennett activates the one man who has the skills and experience to track down and take out Orphan X—the first recruit of the program, Orphan A.

Now it's Orphan vs. Orphan with the future of the country—even the world—on the line.

Out of the Dark is the fourth installment in author Gregg Hurwitz's Orphan X series. This story picks up 6 months after the ending of Hell Bent. Evan Smoak aka Orphan X had no idea why his first mission in 1997 was so important to Jonathan Bennett, president of the United States. So important, that Bennett has ordered every single Orphan to be exterminated. Evan has since quit the Orphan program and become a force for those who need him. He is the No Where Man who lends his services to the truly desperate.


Bennett has unlimited power and resources built up from years of being in the Department of Defense. He has protection from every single government agency including the Secret Service under Special Agent Naomi Templeton. Getting to Bennett will be the ultimate Nowhere Man mission and it is likely to be his last if he is captured or killed. Whether Evan is successful or fails, nothing will ever be the same for him again. As usual, Hurwitz isn't just satisfied with this one mission. Nope. He gives Evan several.

Intertwined story lines include Mia Hall with her 9-year old son Peter. Mia is facing threats from someone she desperately wants to see behind bars for the rest of his life. Mia and Evan have been dancing around each other romantically for awhile now. Will they or won't they is the question? Trevon Gaines is a boy who has highly functional autism. He discovers that every member of his family members has been viciously murdered by a psycho out for revenge against Trevon who was just doing what was right. Trevon's only surviving family member is a sister who is doing good deeds in Central America.


Hurwitz actually gives Evan a bit of help in this book. From fellow Orphan Candy McClure, to 16-year old Joey Morales who is a former Orphan who the President wants dead. She's also a brilliant hacker and someone I think that Evan is finally learning to accept as part of his small people he can trust implicitly. Tommy Slojack is a series regular. He's also Evan's man for any weapon he desires. The story also adds the two cents of Naomi Templeton who is thrown into the deep end while trying to keep Evan from assassinating the President. Hurwitz also adds a bit of danger in the form of Judd Holt aka Orphan A. The original Orphan who knows all about Evan's 1997 mission and is now working to stop him in his tracks.


Hurwitz transitions seamlessly between the multiple storylines, and readers easily get a feel for the complex plot details and the multi-faceted characters. While Evan is trying to piece together the puzzle as to why he specifically has been targeted by Bennett, he chooses to remain above board. He never once kills an innocent. (Bennett isn't an innocent) Even when dozens of cops and agents are chasing him all over DC, he only targets the bad guys like Judd Holt and his army of killers.


While Bennett thinks he's Teflon and nothing will stick, Evan slowly but surely drives the point thru that you can run, you can have hundreds of people protecting you, but your past will eventually catch up to you. One of Evan's last jobs is what he promised Trevon. Take out the man responsible for the brutal murders of his family and protect Trevon's only remaining sister from being another victim. As usual, this story is not only action packed, but there is plenty of violence and bloodshed.


I'm very appreciative of the publisher for approving access to this title and the next 2 for me. I love this series and will keep reading it right to the end.