#Review - The Frozen Prince by Maxym M. Martineau #YA #Fantasy 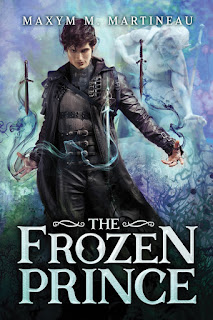 Noc Feyreigner, leader of the assassins of Cruor, is living on borrowed time. If he fails to kill Leena Edenfrell—the girl he can't live without—his own life will be at stake. With the dark magic of Curor's Oath testing his control, Noc has to fight with everything he is to keep his friends and family safe.

Leena would do anything to help Noc overcome the oath. So when she hears of a beast rumored to have the power needed to save Noc's life, she embarks on a quest to the frozen north. But what starts as a hunt for a magical beast quickly turns Leena, Noc, and their trusted band of assassins into prey…and time is running out.

The Frozen Prince is the second installment in author Maxym Martineau's The Beast Charmer trilogy. The first thing you should know is that this series was originally released as an adult fantasy romance. It has been reworked and re-released as a teen fantasy, retaining the same title, plot, and characters, while also aging them down and removing the explicit sexual content. This story revolves around a group of 5 individuals; Noc Feyreigner, Calem, Kost, Ozias, and of course, Leena Edenfrell who survived a contract that was put out on her life by an unknown person for reasons that haven't been fully explained yet.

Leena is what's known as a charmer. A Charmer is a person who possesses the rare ability to summon magical beasts which is why the series is being compared to the book Fantastic Beasts. Charmers are only as strong as the beasts they keep, and Leena is one of the strongest around. The story actually opens with the introduction of Prince Aleksander aka The Frozen Prince who we know as Noc. Noc is the leader of the assassins of Cruor which had something of a slimming down when a group decided to follow someone else.

The Cruor are undead. They have been raised by Cruor Masters who are able to restore the dead to life.  They are not easily defeated or swayed. When an assassin takes a job, they are highly successful at completing their mission. Noc has found himself in quite a quandary after accepting a contract that is magically enforced to kill Leena. Although he's broken the curse that haunted him for 50 years, if he fails to kill Leena—the girl he can't live without—his own life will be at stake. With the dark magic of Curor's Oath testing his control, Noc has to fight with everything he is to keep his friends and family safe.

Leena would do anything to help Noc overcome the oath including trusting people who end up betraying her. Leena, who has been pardoned for her past crimes, gets a visit from fellow beast Charmer Gaige who offers to help if he gains access to the famous Cruor library. When she hears of a beast rumored to have the power needed to save Noc's life, she embarks on a quest to the frozen north to collect key parts of the equation. But what starts as a hunt for a magical beast, quickly turns Leena, Noc, Kost & Ozias into prey. It seems as though neither Leena nor Noc have escaped their destinies just yet.

Trouble in the form of former assassins, traitorous beast charmers, and King Varek's Sentinels who have a capture and kill order on Lenna and Noc. With time is running out before Noc has to kill Leena, the group also has to figure out how to train Calem who has a tendency to shift into beast mode whenever he gets angry after he died and was brought back to life. On top of everything else, Noc seems to be keeping secrets from Leena, ones that pertain to his past and tie into the present. Secrets that all come out later in the story with a twisted cliffhanger ending.

Some questions & answers for those who read The Beast Charmer have been posted by the author:

Is The Beast Charmer different from the young adult (trade paperback) version?
Yes and no. The plot and characters are the same, though the cast has been aged up to align with an adult audience. This edition focuses more on the romance between Noc and Leena, and as such, there is some explicit content and it’s geared toward an adult romance readership.

Does this mean we won’t get the remainder of the Beast Charmer series in the adult version?
At this time, Leena and Noc’s story will be told in its entirety in the young adult version. Stay tuned for potential additional materials geared toward the adult, romance-reader audience.