#Review - Day One by Kelly deVos #YA #SyFy 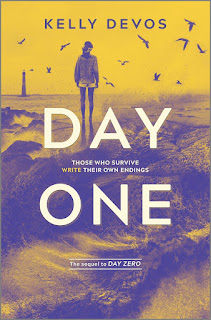 In the sequel to Day Zero, stepsisters Jinx and MacKenna must put aside their enmity and work together to rescue their little brother...and possibly save the world. A nonstop whirlwind of a read for fans of Marie Lu, Rick Yancey and Dry by Jarrod and Neal Shusterman.

Three months ago, all Jinx Marshall wanted was to stay up way too late playing video games and pretending the world was okay. With her parents’ role in a massive political conspiracy exposed, she ends up on the run, desperate to rescue her little brother Charles from the clutches of The Opposition.

Jinx always hated her father’s obsession with disaster prepping. But as she fights her way across a war-torn country and into a secret military research facility, she realizes that following Dr. Doomsday’s Guide for Ultimate Survival may her only hope of seeing Charles again.

MacKenna Novac had it all. The right backstory. The right qualifications. But her life as a student journalist was destroyed forever in the explosions that triggered the country’s meltdown. Determined to help Jinx, Mac wants to get Charles back too. But she’s also to find her own reason to survive. She becomes the first reporter of the new civil war. In a world where your story is your ultimate weapon, Mac may be the toughest freedom fighter of all.

Day One is the second and final installment in author Kelly deVos Day Zero Duology. This book focuses on several key characters including Susan "Jinx" Marshall and MacKenna Novak who are stepsisters thrown into a world of political deceit, and betrayal, while being chased by two separate groups called the Spark and the Opposition who wants what Jinx has. As the story opens, the group of Jinx, Jay Novak, Gus Navarro, MacKenna, and Toby Novak are regrouping in Mexico after a stunningly violent scene which closed the first installment.

All that matters for Jinx is getting her brother Charles back, but she also may have the key or is the key to restarting the country. All that matters to MacKenna is keeping her remaining family alive but she is the ideal person to become the first reporter of the civil war by doing doing field reports to ensure that nothing that has happened and will happen goes unreported. To summarize, Jinx’s father the legendary Dr. Charles Maxwell Marshall II is dead. Before he died, Marshall told Jinx to take the key to restoring the country to Esmerelda Ojos. Jinx brother has been taken by her mother in a stunning move nobody saw coming. Jay Novak has been framed as a terrorist by his wife and Jinx's mother Stephanie Marshall who is also is a high-ranking member of the Opposition.

On the political landscape, David Rosenthal is in hiding after presumably winning the election but was overthrown. Ammon Carter has forcibly taken over the country and those who don’t step in line, are rounded up and discarded. In Mexico, things get interesting when the group is found by a group of ex-soldiers and a 5-star General who are wanted by the Opposition for treason. The group also includes Jinx’s nemesis Harold Partridge aka Terminus who betrayed her in the first book. Marshall apparently left Jinx in charge of the base, but things don’t exact go as Marshall wanted them to go.

Things get dicey when Mexico tells all Americans living in the country to get out and California under Governor George Clooney chooses to secede from the USA which causes a massive retaliation by Carver. The Second Civil War has begun. Though her main talent is computer hacking, Jinx was trained by her survivalist father in just about everything it takes to survive a zombie apocalypse, or what is actually happening in the world, so she is more prepared than most teens. MacKenna has always wanted to become an investigative journalist and now she has a front row seat to either the destruction of the country, or its salvation. Thankfully, there’s no outright antagonism between MacKenna and Jinx. There is, however, conflict when the facts about her father and the actions of her brother seem to do more harm to the group than help it survive.

There’s are plenty of twists, and action, and suspense, and betrayals, and backstabbing as Jinx and her group travel from Mexico, to California, to a US Navy carrier which Clooney has taken charge over, to a massive casualty event in California, to the coast of Oregon, to the Los Alamo's Testing Range in New Mexico where things finally come to a head with stunning revelations. Throughout this book, I just couldn’t bring myself to trust Navarro. He was trained by Marshall; he was supposed to help protect Jinx, we really don’t know if he is Opposition or Spark. Gus has plenty of secrets to fill an entire chapter in this book which MacKenna uncovers but fails to tell Jinx. I also couldn’t bring myself to like Toby who fell hard for Carver’s daughter and then blindly allowed himself to be used.

The ending is a Hodge podge of creative thinking and dystopian science fiction craziness by the author who apparently is enamored with Clooney and Cory Booker. In this country, if you support a certain candidate, you are apparently supposed to be rounded up and sent to reeducation camps to change your political leanings. This book comes close to mirroring what’s happening in the USA today. Carver chooses to round up all of his enemies and either has them killed or put in camps where they have little chance of escaping. I don’t want to live in a world like this and I hope those who read this review agree with me so that Germany, Russia, Cambodia, China, Cuba, and Venezuela doesn’t happen here.