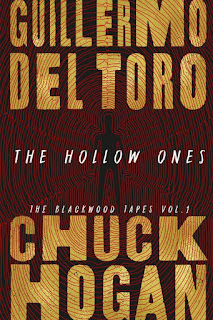 A horrific crime that defies explanation, a rookie FBI agent in uncharted territory, and an extraordinary hero for the ages: an investigation spirals out of control in this heart-pounding thriller.

Odessa Hardwicke's life is derailed when she's forced to turn her gun on her partner, Walt Leppo, a decorated FBI agent who turns suddenly, inexplicably violent while apprehending a rampaging murderer. The shooting, justified by self-defense, shakes the young FBI agent to her core. Devastated, Odessa is placed on desk leave pending a full investigation. But what most troubles Odessa isn't the tragedy itself -- it's the shadowy presence she thought she saw fleeing the deceased agent's body after his death.
Questioning her future with the FBI and her sanity, Hardwicke accepts a low-level assignment to clear out the belongings of a retired agent in the New York office. What she finds there will put her on the trail of a mysterious figure named Hugo Blackwood, a man of enormous means who claims to have been alive for centuries, and who is either an unhinged lunatic, or humanity's best and only defense against unspeakable evil.
From the authors who brought you The Strain Trilogy comes a strange, terrifying, and darkly wondrous world of suspense, mystery, and literary horror. The Hollow Ones is a chilling, spell-binding tale, a hauntingly original new fable from Academy Award-winning director Guillermo del Toro and bestselling author Chuck Hogan featuring their most fascinating character yet.

The Hollow Ones is the first installment in co-author's Guillermo del Toro & Chuck Hogan's Blackwood Tapes series. Odessa Hardwicke is a rookie FBI agent who ends up killing her partner Walt Leppo after he inexplicably turns violent while apprehending a rampaging murderer. What's most puzzling is that she sees a mist like ripple of heat mirage rising from Leppo's body leaving behind an odor of solder. Odessa's career is on the brink of ending after being confined to desk duty while being investigated whether her shooting was justified or not.

Meanwhile, she is tasked with clearing out the office of a retired FBI agent Earl Solomon's belongings. She finds some odd things, including a room filled with tapes, that cause her to track down the agent who's recently had a stroke and is hospitalized but lucid. When she tells Earl of the strangeness that occurred after she shot Walt, he directs her to leave a specific letter in a mailbox and await an answer from a man known as John Silence. Between Silence's stoicism and mystery and Odessa's curiosity, the two follow a trail of demons, magic, and the occult that leads to the answer of what killed Odessa's partner.

**Apparently, I have a different copy of this book than other reviewers. Others have Hugo Blackwood as the person who works with Odessa not John Silence. For the purpose of this review, I will use Silence even though the series appears to be the Blackwood Tapes. **

This present-day narrative is interspersed with two stories. One revolves around Solomon’s first FBI case in 1962, when he was sent to the Mississippi Delta to investigate a lynching with possible racial undertones that seemed highly unusual. As one of only 3 black FBI agents, Solomon was sent to keep the peace before racial tension destroys the small town after a white man is lynched. When a demonically possessed child tells him to get John Silence, Solomon finds himself living in the world of the occult where simple answers just won’t cut it. His actions will have everlasting affects on Solomon and his career.

The other concerns John Dee, a 16th-century alchemist attached to the English Royal Court who is meddling in areas that are best left alone. Unfortunately, Dee’s efforts are successful and will affect the lives of many people over the next few centuries leaving Silence to battle evil for centuries to come and haunted by a curse that took the one person he loved from him. There is another character in this book called Obediah. Obediah is what's called a Hollow One who travels from body to body, murdering innocents and causing havoc only to leave the body once the host is dead.

I recently uncovered a shockingly familiar coincidence. Has anyone watched the 1998 movie Fallen starring Denzel Washington, John Goodman, and the late James Gandolfini where a fallen angel jumps from body to body causing havoc and murdering innocents while leaving the person without any memories of what happened? I have. The only difference in this book is that when Obediah jumps, it’s only after his host has been killed.

A final note: the authors apparently have chosen to name this as the Blackwood Files in respect to Algernon Blackwood’s John Silence occult detective series which I have not read.