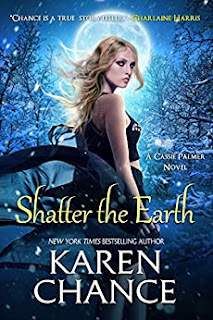 Ironically for the time traveling, chief seer of the supernatural world, time has never been on Cassie Palmer’s side. There has always seemed to be too much to learn, too much to master, and never enough hours in a day. But the tables have now turned, and the fluctuating timelines of Earth and Faerie are diverging, slowing time in Faerie relative to Earth, and giving humans an advantage for the first time in their war with the fey. It is one they desperately need, for a literal war of the worlds is about to take place. To win, or even to survive, Cassie and her allies, the powerful vampire senator Mircea Basarab and the formidable war mage John Pritkin, will have to pull off their greatest feat yet. And find a way to become more than the sum of their parts.

Shatter the Earth is the Tenth installment in author Karen Chance's Cassandra Palmer series. **Slight Series Spoilers** 24-year-old Cassie Palmer is the time traveling, ghost whispering, chief seer of the supernatural world, a job description that sounds way more fun than it actually is. It's hard to forget that Cassie’s only been the Pythia for 5 months. It seems like 14 years. Oh, wait! Especially when she has to deal with so many issues that take up all of her time. There’s Rhea, Chief acolyte, and heir apparent, who can’t shift through time which is what an acolyte of a Pythia is supposed to be able to do.

Rhea needs a swift kick in the pants, and the only person who might challenge her is her deceased mother. Mircea’s obsession with finding his wife Elena, mother of Dorina, ends up dragging Cassie along with him to Romania of the past which isn’t as fun as it might sound like. Especially when you are being chased by Svaresti Fae who kidnap human women. An entire line of Pythia’s told Mircea that he can’t get her back no matter what he does because it violates time travel and messes with the past. Let’s not forget that by vampire law, Mircea and Cassie are married. Doesn’t help that they are magically bound by the over’s Knot.

It also doesn’t help that he tends to steal her powers when it’s most inconvenient for Cassie. It doesn’t help that if he dies, she dies as well. As a member of the Vampire Senate, and the leader of the Vampire army, if Mircea dies, all is lost. To make matters more interesting, there’s ½ incubus demon war mage Pritkin, allegedly Cassie’s boyfriend who she spent an abundance of time going back in time over and over and over again to try to save him only to be chased all over the place by Gertie, has been wholly unavailable to her as a bodyguard/boyfriend while he prepares to lead the Silver Circle Mages invasion into Faerie.

Cassie and her allies the vampires, the mages of the Silver Circle, and Caedmon, King of the light Fae, have been preparing to battle the Dark Fae and the Dark mages for months. While the time for the invasion is approaching fast, Cassie has to deal with all issues that I’ve previously mentioned, including, someone trying to assassinate her and her apparent ability to save herself by borrowing powers from Mircea. Then there's the fun fact that she's never been trained until a Pythia from the past offers to help her. While she’s gotten much, much better, she’s also been doing stupid things like stealing time.

I have to say, I’ve been reading this series from the beginning. Haven’t skipped one book, not even when the author chose to self-publish. In fact, my library decided to purchase this copy for me which I am once again grateful for all they do. It’s always the last part of the book that is the most interesting to me. The action takes place throughout the book as Cassie deals with issue after issue, and with a sick, twisted, bastard named Jonathan who ups Cassie’s game when the war finally makes the pages of the book.  Overall, this story was fast-paced, which was to be expected of this author’s style when it involved Cassie.