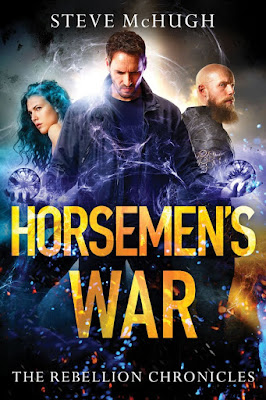 It’s a dark day for the Earth realms. Will it be the last?

Sorcerer Nate Garrett lost much in the battle that devastated Asgard, but the war against darkness is far from over. He’s spent a year searching for Arthur, hell-bent on stopping the evil leader of Avalon and rescuing his friend Tommy from his clutches. Nate’s investigation brings him to Washington, DC, where he finds the city under siege. Just when all hope seems lost, Layla Cassidy and her team arrive to join the fight, but Avalon’s deadly plan to conquer the Earth realm is underway.

Meanwhile, Mordred is on a quest to find allies in the upcoming war against Avalon, hoping to find Arthur and stop him before it’s too late.

As the rebellion forces close in on Arthur, each of them know this could be their last fight. But with Arthur massing an unstoppable army of his own, will Nate’s fury be enough to defeat him once and for all?

The book starts with a heartfelt moment between Nate and Tommy, in 1798 Virginia, USA 16 years after Nate’s wife was murdered. You can tell why Tommy and Nate have been friends for so long. Same goes later for Nate and Mordred who were once sworn enemies and now brothers in arms. This book revolves around three characters Nate Garrett, Mordred, Layla Cassidy, along with a plethora of secondary characters. Nate Garrett is a sorcerer and necromancer once called the Hellequin. He was created to be the Horseman of Death. He’s in a relationship with Selene and has a newborn daughter who is being protected by his mother Brynhildr.

Mordred is a sorcerer created to be Horseman of Conquest. He’s a video game enthusiast who is often heard humming theme songs from popular games. He’s now reluctant King Mordred, holder of Excalibur, in a relationship with Hel. Layla Cassidy is an Umber able to manipulate metal. She’s team leader of a group that includes Chloe, Piper, Tego, Jinayca, and others as they are needed. She’s the youngest of the primary characters at 26 and has no idea what she will do once the war is won, which she is hoping is soon. Layla has a robotic arm thanks to losing her real arm to her own mother.

Nate is still the primary narrator, with Mordred and Layla narrating smaller sections as McHugh juggles battles across different realms, on multiple fronts including Earth, Olympus, Avalon, Camelot, Atlantis, and Shadow Falls Realm. The story is full blown action from the start to finish. Mordred and his team end up encountering Poseidon, they later arrive in Olympus where they beg for an army to help defeat Arthur and his allies. Nate and his team try to find Tommy and will eventually end up in Atlantis as well as and Camelot. In between, Nate and Mordred have established a base in the City of Solomon, Shadow Falls Realm. A large part of this story takes place in what’s called the Human realm mostly around Washington, D.C.

Arthur has very nearly established himself as the sovereign ruler of all realms and anyone who shows even slightest bit of resistance is ruthlessly executed. In D.C alone, his Knights of Avalon are murdering people by the thousands. Tommy Carpenter was kidnapped by Merlin at the end of the last installment and hasn’t been seen or heard from in a year. The author combines characters straight out of Arthurian legend with Greek mythology and even a bit of Sumerian god's for good measure.

I think the ending of this book was well thought out. As I said before, Layla needs some time away from everyone to decide what she wants to do with her life. She’s got no romantic possibilities. She’s got a Saber tooth tiger as a companion. She could literally backpack across all know realms and still have time to decide what’s within her possibilities. Some really didn’t like Layla and I can understand that. She’s not a legend like Nate or Mordred. She’s a young woman who was thrust into an impossible situation thanks to her own parents. I haven’t read the first 7 installments in the Hellequin Chronicles. I am thinking that one day in the near future I will try to add them into my reading schedule. Since I met my reading challenge for 2020, I might return to switching between older releases and newer releases to keep things fresh.