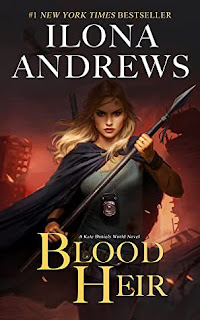 Atlanta was always a dangerous city. Now, as waves of magic and technology compete for supremacy, it’s a place caught in a slow apocalypse, where monsters spawn among the crumbling skyscrapers and supernatural factions struggle for power and survival.

Eight years ago, Julie Lennart left Atlanta to find out who she was. Now she’s back with a new face, a new magic, and a new name—Aurelia Ryder—drawn by the urgent need to protect the family she left behind. An ancient power is stalking her adopted mother, Kate Daniels, an enemy unlike any other, and a string of horrifying murders is its opening gambit.

If Aurelia’s true identity is discovered, those closest to her will die. So her plan is simple: get in, solve the murders, prevent the prophecy from being fulfilled, and get out without being recognized. She expected danger, but she never anticipated that the only man she'd ever loved could threaten everything.

One small misstep could lead to disaster. But for Aurelia, facing disaster is easy; it’s relationships that are hard.

Blood Heir is the first installment in authors Ilona Andrews Aurelia Ryder series. This is obviously a spin-off of the Kate Daniels series which ended with Magic Triumphs. This story takes place 8 years after Julie Olsen-Lennart left Atlanta to make her own way in the world and to gain insight into her sensate magic. For years, she's been training with Roland, who she calls her grandfather, and Erra, her great-aunt who named her heir of Shinar. With two powerful entities like Roland and Erra to guide her, Julie has become a powerful force to be reckoned with.

"When magic crests at its peak, the King of Fire will leave his citadel of misery in the Western Desert and travel east to devour the queen who doesn't rule and sever bloodline reborn. Only the one who shares his power may oppose him."

4 years ago, Julie, was told of a prophecy from the oracle Sienna. After battling the God called Moloch, the Child Eater, and taking his eye, Julie returns to Atlanta with a new face, a new magic, and a new name—Aurelia Ryder—drawn by the urgent need to protect the family she left behind. Sienna advised Aurelia that if Aurelia’s true identity is discovered, those closest to her will die. She also can’t have any contact with Kate or Curran. Aurelia’s plan is supposed to be simple; get in, solve the murders, prevent the prophecy from being fulfilled, and get out without being recognized.

Her mission is to investigate Pastor Haywood's murder who she believes was killed on Moloch's orders and stop them. Her first stop is the Order of Mercurial Aid under Knight Protector Nikolas Feldman who has a complicated relationship with her adopted family. Aurelia holds the Tower card one of 5 in existence. It was given to her by a Order Master which grants her the right to call on the Order for aid and gives her the authority of a Knight-Captain outranking everyone except for Nick. Aurelia is granted status as Knight-Defender with her own badge to keep her identity and mission a secret from the rank and file. One could call Aurelia a mercenary with a military mindset.

Aurelia is a much, much different character than the former Julie Olsen-Lennart. She belongs to New Shinar and to Erra, the Plaguebringer, the City Eater, Rigmur Pana-Shinar-the Voice of the Old Kingdom who she calls Grandmother. She's also called Dananu Edes-Shinar, the strength of New Shinar, and a Princess as well. Atlanta isn't the same place she left behind. She’s found time to be with Conlan when he visits with Roland. If you are wondering about Kate and Curran, Kate has moved on, Curran shows up once, but neither is a major part of this story. Conlan who is now 9 years old, does.

Aurelia has a horse named Tulip that is bloodthirsty. She has a hawk named Turgan that sees and hears what she can’t. She has a sword similar to Kate’s and a Spear named Dakkan. She’s accepted her magic and is no longer scared of using it to save herself or others. She’s got a heart of gold when it comes to orphaned street kids. In fact, it is her mission to protect the children from Moloch who loves to feed on them. She expected danger, but she never anticipated that she would be recognized by the one person she lost her heart to: Derek.

I think there’s a lot to discuss about Aurelia and Derek’s possible future now that he knows about her. Julie was in love with him for 5 years, but he never made any effort to take the relationship to the next level like Curran and Kate when Kate used to bring him food or make him meals. Derek has a whole lot of issues of his own and I don’t mean with Aurelia. After all, he could easily be Pack Alpha any time he wants to be, and he proves that by getting revenge on the thing that killed his friend the Pastor. There are others from the Kate Daniels who show up in this series like Luther, DeSandra, Andrea’s son Ascanio Ferara who is a piece of work now, along with Christopher and Ghastek.

I think this is a good start to a hopefully new series. There is just enough action and suspense to keep the faithful Ilona Andrews lovers happy. There are a few surprises along the way as well.

"I received a complimentary copy of this book. Opinions expressed in this review are completely my own."