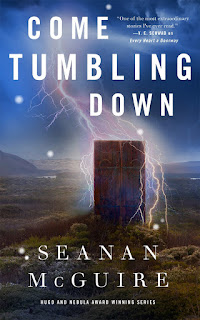 Come Tumbling Down picks up the threads left dangling by Every Heart a Doorway and Down Among the Sticks and Bones—it's both a standalone delight and a treat for longtime fans of the series.

When we Jack left Eleanor West's School for Wayward Children she was carrying the body of her deliciously deranged sister—whom she had recently murdered in a fit of righteous justice—back to their home on the Moors.

But death in their adopted world isn't always as permanent as it is here, and when Jack is herself carried back into the school, it becomes clear that something has happened to her. Something terrible. Something of which only the maddest of scientists could conceive. Something only her friends are equipped to help her overcome.

Eleanor West's "No Quests" rule is about to be broken.

Come Tumbling Down is the 5th installment in author Seanan McGuire's Wayward Children series. When Jack Wolcott left Eleanor West's School for Wayward Children with her deranged twin sister Jill back to The Moors, most of us probably thought that would be the end of the twins story. Uh, nope! Apparently, they will always come back home. When lightning mysteriously appears out of nowhere, Christopher and Cora witness a door opening. What's even more shocking is that Jack is being carried by a strange woman (Alexis) and she is stuck in Jill's body!

Alexis being alive is shocking enough to those who read Down with the Sticks and Bones. But it seems that Jill and the Master have crossed the line this time. Jill's actions have gone beyond repentance mode this time. Jill is not in the least repentant of her lethal lifestyle, and she and her adoptive vampire father have thought of an ingenious way to get around this limitation by using Jack's body. What she’s now done is not only ruining Jack’s life, but likely to lead to an imbalance of power and deadly warfare in the Moors world.

Even though Eleanor has a no quest rule, that rule has already been broken once in an effort to safe Sumi. This quest will involve Jack, Alexis, Christopher, Kade, Cora, and Sumi, They will need to work together to save both Jack and the Moors from Jill and the Master. Of course, there are always complications along the way. To make matters interesting, Jack's mentor Dr. Bleak has been killed leaving Jack to make all the plans and alliances in order to stop the Master from using Jack's body to give Jill immortality.
Problems appear almost immediately when Cora is called to the sea and the Drowned Gods. If you remember, Cora went to a world where she was a mermaid, Christopher went to Mariposa where he fell in love with a skeleton girl, Kade is a Goblin prince in waiting, and Sumi went to a land similar to Candyland.  Whenever I read about Jack, I get eerie feeling that she's Dr. Frankenstein's apprentice. Jack, brilliant but burdened with OCD, has found joy in the mad scientist lifestyle, at least until the most recent troubles. She calls herself a monster, and in some ways that’s true, but she’s totally in love with Alexis who holds her heart.
I don't think we will see Jack again in this series, but I pretty much said that after she took Jill back to the Moors.