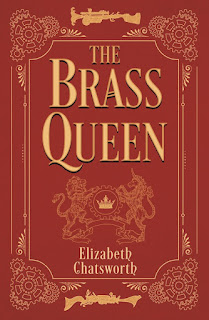 She knows a liar when she sees one. He knows a fraud when he meets one.

In a steam-powered world, Miss Constance Haltwhistle is the last in a line of blue-blooded rogues. Selling firearms under her alias, the “Brass Queen,” she has kept her baronial estate’s coffers full. But when US spy J. F. Trusdale saves her from assassins, she’s pulled into a search for a scientist with an invisibility serum. As royal foes create an invisible army to start a global war, Constance and Trusdale must learn to trust each other. If they don’t, the world as they know it will disappear before their eyes.

If you like the Parasol Protectorate or the Invisible Library series, you’ll love this gaslamp fantasy—a rambunctious romantic romp that will have you both laughing out loud and wishing you owned all of Miss Haltwhistle's armaments.

In 1897, a fiery British aristocrat and an inept US spy search for a stolen invisibility serum that could spark a global war.

The Brass Queen, by author Elizabeth Chatsworth, is a Gaslamp fantasy, alternate-history, Victorian England, romance mash-up. Debutante and secret weapons dealer, Lady Constance Haltwhistle, is the reclusive daughter of ‘a portal-tripping mad scientist’ who disappeared into an alternative world leaving his only daughter hunting to find a husband before she loses her family’s estate to an agenda driven relative. Since her father has been absent for an awfully long time, her uncle is threatening to seize the estate from under Constance’s bustle, if she can’t manage to snag a decent husband within the next week.

While hosting a coming-out ball at Royal Steamwerks Exhibition Dome, an attempt is made on her life. Not the first, or second, or even third time this has happened. Not surprisingly since she's made a habit of making powerful enemies out of former clients. Meanwhile during the ensuing melee, 3 scientists, including Constance’s friend Dr. Maya Chauhan who is head of the Steamwerks lab, are kidnapped by invisible assailants and Constance's life is saved by a stranger. Said Stetson hat wearing stranger is an American cowboy turned spy named J.F. Trusdale who has a few secrets of his own including why he is here in Sheffield. Trusdale served in the US Army Military Intelligence Captain and is on the trail of a serum that makes a person invisible.

Constance and Trusdale must work together to fight off invisible assassins and a royal foe who wants to remove Queen Victoria from power and create a global war. While Constance and Trusdale are fighting each other’s quirks and personalities and feelings, several villains want to remove Constance. She keeps finding ways to escape every assassin sent after her which makes the villains even more eager to go the extra mile.

In many ways, this story reminds me of the Parasol Protectorate with the tongue-in-cheek humor, flamboyant main character, and the ridiculous situations the characters find themselves in, including a bloody polo match that will make you laugh. There are, however, no vampires or werewolves. If you are wondering about the title The Brass Queen, it's actually Constance's secret alias which she secretly sells steampunk firearms, exo-suits, and flamethrowers.

While the story itself has a beginning, a middle, and an ending, the author stated that she is eagerly writing the next adventure for Constance and Trusdale in Paris.