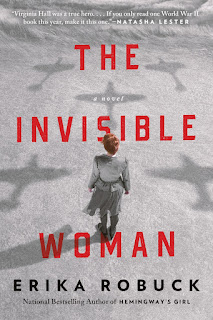 March 1944. Virginia Hall wasn’t like the other young society women back home in Baltimore—she never wanted the debutante ball or silk gloves. Instead, she traded a safe life for adventure in Europe, and when her beloved second home is thrust into the dark days of war, she leaps in headfirst.

Once she’s recruited as an Allied spy, subverting the Nazis becomes her calling. But even the most cunning agent can be bested, and in wartime trusting the wrong person can prove fatal. Virginia is haunted every day by the betrayal that ravaged her first operation, and will do everything in her power to avenge the brave people she lost.

While her future is anything but certain, this time more than ever Virginia knows that failure is not an option. Especially when she discovers what—and whom—she’s truly protecting.

The Invisible Woman, by author Erika Robuck, is the story about one of America's best female spies: Virginia Hall. This is the first time anyone has written a novel about Virginia Hall, the Baltimore woman first rejected from the US Foreign service because an injury left her with one leg, who went on to become a secret agent who helped change the course of the war. This story takes place between 1926 and 1948. Virginia Hall was a true hero who was credited with doing extraordinary things during her career. Virginia was a brilliant woman who became quite adept at being a spy.

Virginia was a diplomat when World War II broke out and the Nazis invaded France. After escaping to Britain, she later posed as a reporter before America entered the war. But thanks to her prosthetic leg, she almost didn’t get a chance to prove her mettle to her supervisors. Thanks to Vera Atkins, as well as William Donovan, Virginia was given a chance to work with the SOE and OSS. (Special Operations Executive (SOE) and the OSS (Office of Strategic Services). On July 16, 1940, British Prime Minister Winston Churchill appointed a civilian, Hugh Dalton, to be SOE's political master and then promptly ordered him to 'set Europe ablaze!'

Bold words indeed from Churchill considering that SOE only had a few agents in the field and no effective wireless communications. The story begins on March 21, 1944. After a long delay, Virginia is returning to France to help the Maquis against the Nazis and their allies the Milice and preparing for what will eventually be D-Day, the invasion of Europe. The Milice française (French Militia), generally called la Milice was a political paramilitary organization created on 30 January 1943 by the Vichy regime (with German aid) to help fight against the French Resistance during World War II.

You might say that they were even worse than the Nazi’s because they captured and killed their own people. Virginia knew there was a huge price on her head and if she’s captured, she will be executed, or worse. Virginia, who was 37 at the time, knew that she had 6 weeks to make a difference before her past, and the Germans caught up to her. She lasted for months. Disguised as an old woman, she moved around undetected through France assisting multiple groups of the Maquis. She is a 'pianist'. Communicating with HQ to set up drops of supplies under the full moon. She was a mentor for hundreds of young men who need direction.

She’s waiting for D-Day and the opportunity to overthrow the Nazis and liberate France. Her last mission to Lyons ended in failure after she was betrayed by someone she team trusted. Someone she’s willing to hunt down and may him pay for his actions. But she can’t afford to be betrayed again. Virginia’s mission is to find the Maquis before allies unleash Operation Overload. (Operation Overlord was the codename for the Battle of Normandy, the Allied operation that launched the successful invasion of German-occupied Western Europe during World War II. The operation was launched on 6 June 1944 with the Normandy landings.)

Virginia has been called a variety of names by those who wanted to get rid of her. Her compatriots in the French Resistance referred to her as La Dame Qui Boite, the lady who limps. The nickname was later uttered by the Gestapo in whispers about her successes against them. Virginia’s efforts to bring together a rag tag team of French rebels also had high probability of massive casualties. After all, the Nazi’s were out in force hunting the French resistance, and if Virginia were caught with them, she’d be the cherry on their cake as it were.

But if she can pull together, the allies just might find a way to free France and allow the allies to march towards Germany. Once you read The Invisible Woman, you will never forget her name. Virginia, code name Diane was the most formidable force within the (SOE/OSS and later the CIA. Tasked with conducting espionage, sabotage, and reconnaissance in Nazi infested France, Virginia became an expert in organizing resistance movements. Virginia’s unfaltering courage and self-sacrifice will be remembered once you finish the novel.