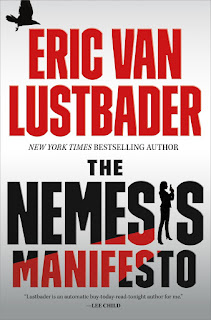 Russian meddling, American fragmentation, and global politics collide in this action-packed, international thriller from New York Times bestselling author Eric Van Lustbader. In The Nemesis Manifesto, Eric Van Lustbader, "the master of the smart thriller” (Nelson DeMille), delivers an epic and harrowing adventure of the predatory forces that are threatening the very fabric of democracy and kicks off a compelling new series with a singular new hero for our time.

Evan Ryder is a lone wolf, a field agent for a black-ops arm of the DOD, who has survived unspeakable tragedy and dedicated her life to protecting her country. When her fellow agents begin to be systematically eliminated, Evan must unravel the thread that ties them all together ... and before her name comes up on the kill list.

The list belongs to a mysterious cabal known only as Nemesis, a hostile entity hell-bent on tearing the United States apart. As Evan tracks them from Washington D.C. to the Caucasus Mountains, from Austria to a fortress in Germany -- where her own demons reside -- she unearths a network of conspirators far more complex than anyone could have imagined. Can Evan uproot them before Nemesis forces bring democracy to its knees?

The Nemesis Manifesto, by author Eric Van Lustbader, is the first installment in the author's Evan Ryder series. It is a classic spy novel with modern day conspiracy theories and a tangled web of operatives and agencies that lead to layers of intrigue and a mind blowing ending. Evan Ryder is a super-spy working for a secret black ops program run by Benjamin Butler. Evan has stymied the Russians at every turn for years, and dispatched a legion of Russian agents. She's considered a lethal threat to the Federation and at the top of their list to be eliminated.

The Russian intelligence services hate her for foiling their nefarious plots, and especially for her friendship with one of their assets, Lyudmilla Shokova, who they regard as a traitor to the Motherland, so they have hatched a plot to bring her down. They believe the two women shared important information about the Kremlin's current and future plans and they plan to use their own spy to get close to Evan. Meanwhile, the SVR (The Foreign Intelligence Service of the Russian Federation) and GRU (Russia’s military intelligence service) are ramping up new cyber warfare efforts to unload a new generation of bots on the US.

With a new project called Nemesis, the Russians are hoping their dezinformatsiya campaign aimed solely at America and the news organizations will bring the country towards another Civil War. Nemesis controls an enormous network of Twitter bots that spew out the most egregious racial epithets that one can imagine. They target women, Hispanics, immigrants, and Jews. Nemesis main goal is to destroy the life of Benjamin Butler with a little help from their own deep cover agent. Benjamin is dealing with a serious issue in that certain people in the administration appear to be willing to believe the Russian disinformation lies and therefore his job becomes even more vital to get to the bottom of who is killing off western clandestine operatives.

Evan herself has issues. She has a hole in her memory that needs to be remedied before she finds herself once again in the wrong place at the wrong time and in need of rescuing. The action ramps up when Evan and Brenda Myers appear to be targets of an assassination attempt. With Brenda injured, Evan faces an extremely talented and trained operative who nearly gets the best of her. This brings in characters like Isobel Lowe who I am not sure yet who she works for or what her end game is supposed to be. All I know is that she has her hands in the cookie jar at almost every point in this story and has a working relationship with Ben.

Brenda seems to serve as an example of a bad female agent. She was a bit of a mental loose cannon which issues that seemed to stem from seeing her dad in a compromising position. Then as soon as she found out the guy she was sleeping with was a double agent she started on a rape tirade and made all sorts of terrible field agent decisions. I found Brenda rather exasperating both for her inability to see the bigger picture and her foolhardy decision to soldier on when that was clearly the wrong choice.

The reader can never be completely sure, however, exactly who is working for who. With plenty of double agents, deception, misinformation, and political maneuvering. The major villains are Russians, either being Russian or pretending to be Nazis which apparently the world is now filled with which is fictional nonsense. The author goes as far as blaming the Russians for the far right white supremacy garbage that is infesting the news cycle while cheering on Antifa and far left groups who are closer in ideology to Russia than the US. There's also a sub-plot about some internal strife with upper level Russian leaders leads to the appearance of the so called Sovereign who we know as Putin.

Central to the story are a secret group symbolized by ravens.  This group is the forefront of efforts to tear the US apart and cause a major rift which they could then walk through the front door while everyone else is pointing fingers at the other side of the aisle. Meanwhile, Russian power players have animosity and power struggles among themselves and use their positions of power to cheat on their wives with women who hope they will be the replacement. In the end, Evan must wade through a swamp worth of trouble to get an answer as to what happened to missing cover intelligence agents.

There are well over a handful of key players in the book, all of which have separate but interconnecting plotlines – and their own agendas. The story was action-filled and complex with many twists and turns. The story moves from Russia to Washington D.C. and several countries in between. The American left and right are so obnoxiously divided by stupidity that it almost feels believable that Russian based dezinformatsiya is fueling it or even the Chinese who gain the most from a weakened US. As with the Bourne novels the author has written, there is a ton of subterfuge. Who are the good guys? Who are the bad guys really? Who is your ally? Who can you trust? These questions keep the pages turning.