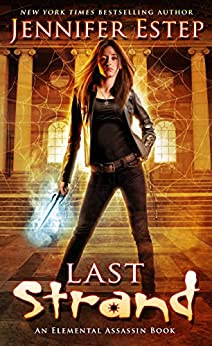 Every bloody thread has been leading to this . . .

I’ve battled a lot of bad guys in my time, both as Gin Blanco and as the notorious assassin the Spider. But I’ve never faced off against anyone quite as powerful and deadly as the dastardly leader of the Circle secret society.

Just when I finally have a lead on how I can defeat the evil group once and for all, new information comes to light that throws me for a loop. Suddenly, everyone and everything I love is in imminent peril of being destroyed, and I’m racing against the clock to figure out a way to save my friends.

The stakes couldn’t be higher, and the danger has never been greater. Somehow, I need to weave one last strand in my web of death—and kill my enemies before they kill me . . .

Last Strand is the 19th installment in author Jennifer Estep's Elemental Assassin series. **Slight spoilers** Last Strand is the final showdown between Gin and her Uncle Mason. Mason is the leader of the Circle, the person behind most of the crime in Ashland, the cause a whole lot of tragedy and discomfort that has affected Gin's personal life including his kidnapping of Gin's sister Bria, crashing a wedding between two of Gin's friends, and putting a target on all of Gin's friends and allies, and nearly killing Gin in the process. Gin also has some unfinished business with Emery Slater who seems almost untouchable.
In recent installments, Gin has taken out four very powerful members of the Circle using her ice and stone elemental magic and her assassin skills she learned from Fletcher Lane while also learning all about the damage Mason did to her family. With the hopes of finding an end to Fletcher Lane's treasure hunt at hand, Gin and Finn, with back up from Owen and Silvio, find themselves visiting Bellum Bank where they hope to find Fletcher's final clue. Which means we are introduced to characters like Drusilla Yang and her father Charles who are weary of Gin and have a very specific rule about no violence within the bank or its vaults.
Considering that Gin tends to leave bodies behind wherever she goes, this is a really good idea. Bellum is a depository for the criminal element in Ashland which Gin is allegedly the Queen of the Underground. Fletcher's final clue might signal another avenue, or the final nail in Mason's coffin. You'll have to read the book to find out. Later, thanks to a lead by Hugh Tucker, who recently saved Gin's life, and has had some pretty interesting moments with Gin, Gin and Bria discover yet another Mason plan that is in the works which could directly affect her own business the Pork Pit.
Yes, Mason is truly that villainous that he has to go after someone's business to make them bend to their will. As Fletcher would say, "Always expect the bad guys to do the worst, most inconvenient thing possible." What would you do to save not only the people you love, but the business that you put so much work into? As with previous installments, Estep once again uses flashbacks with Gin and Fletcher of old assassin cases Gin went on with Fletcher and they always somehow relate to the current case/problem Gin is dealing with.
We get yet another Fletcherism: "We might not always be richer or stronger than our enemies, but we can always fight smarter." When something goes sideways, like it always seems to do, every single one of Gin’s friends is right there to help, no questions asked. Especially considering that some of these characters, like Lorelai Parker, were once considered to be more enemy than friend. Another of Fletcher's favorite things to say is "always trust in yourself, in your own skills, smarts, and abilities, no matter what anyone else says or how hard they doubt you."
Gin needs to find a way to put the final nail in Mason's coffin in a very public manner before he turns the tables on her once again. Gin is her own person and nobody is going to make her do anything she doesn't want to do like being the Queen of the Underground or taking a knee for Mason's machinations. As always, you get the typical Estep hodge podge food orgy which seems to pop up everywhere. No complaints! If I was in this story, I would have legitimately gained 100 pounds easily with all the food that Gin cooks. You also have the solid romance between Gin and Owen, Bria and Finn, as well as two surprising ones that pop up during the story.
As you are probably aware, this is the final installment in the Elemental Assassin series....for now. The author states that one day she might come back to Gin, but she's got a whole lot of other projects on the burner she needs to get through first including some side characters in this series. This is first series that I read when I became a blogger/reviewer way back in 2009. I will definitely miss this series and I'm grateful that the author lasted 19 books! Thank you Jennifer Estep for keeping this series alive for so long!