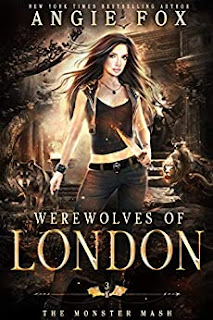 A cease-fire in flames. A dragon on the loose. And wouldn’t you know it? Guy trouble.

Getting drafted into a paranormal MASH unit during a war between the gods was life-changing to say the least. And it hasn’t left me with much of a personal life. Case in point: deciding what to buy Medusa for her baby shower should have been my only “me time” task for the week. But when my hot-as-Hades ex-boyfriend storms back into my life dragging a wounded, half-mad dragon shifter, things get complicated.

The dragon may be the key to ending the war—if I can heal her and keep her hidden. To do it, I’ll need the help of both my current guy and my ex—because nothing says love like a covert operation. But I can’t just let her die or fall into enemy hands. Even if keeping a lid on her secret might force me to reveal mine.

Either way, there’s no going back. This time, I have no choice but to change the world—or die trying.

Werewolves of London is the third and final installment in author Angie Fox's Monster M*A*S*H trilogy. 3 months have passed since the ending of The Transylvania Twist. Dr. Petra Robichaud works for the 3063rd MASH unit on the fringes of a war between the old gods, and the new gods. She recently discovered that the man she thought died 10 years ago, is actually alive and was actually working for her enemies. There is also this prophecy that states that a healer who can see the dead could be the one who finally stops the war which has been raging since the fall of Troy.

The oracles have prophesied that a healer who sees the dead along with her bronze weapon will lead the charge to the finish. If Petra's secret is discovered, it's an automatic death sentence since the Gods have forbidden her talent. To add a few twists to the story, Marc believes it is time to ask Petra to finally marry him which isn't something Petra is ready for. Especially since she had her heart broken, and she can't go anywhere the war is over, or she ends up a casualty of the war. To make this even more twisted, Galen of Delphi arrives at camp injured and he brought with him a special dragon named Leta.

Leta, like most Dragons not named Marc, were forcibly collared and used by the Gods as Kamikaze bombers. And, if that weren't enough excitement, the brief cease fire between gods comes to an end with the arrival of investigators who are looking for two very important people; Galen and Leta. Oh, and let's not forget one of the strangest baby showers that you will ever read about. Petra is invited by Medusa to attend her baby shower along with all of Medusa's sisters and the Fates in attendance who provide Petra with one more piece of the puzzle that she'll need if she's going to stop the fighting between Gods.

Will Petra’s secret be exposed? Can she bring the war to an end? Will Petra finally make a choice between Galen and Marc? Can Galen help Petra achieve the last three prophecies? What other hurdles will the couple face to be together before the war is over? And, will Petra live to tell the story once the entire universe knows who she is?

Overall, I'm a bit confused by the abruptness of the ending but I'm glad that Petra finds a bit of a happy ending. For a long time, Petra didn't want to get her heart broken again, especially by Galen who left her go to back to doing what he does best. Petra’s struggles to succeed in ending the war mirrored her struggles to connect with her forever love. I'm a little confused by the title because honestly it doesn't make sense except for the fact that the author enjoys a bit of sarcasm from her characters.