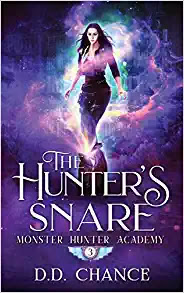 At the academy, funny is the new black…magic.

Reckless, brilliant and incredibly resourceful, Liam Graham can handle any crisis with a devilish grin—but his razor-sharp sense of humor hides a desperate truth. In an elite society where magic is the most coveted commodity, he’s been judged as second-rate, a castoff. Weak.

Liam hasn’t let his lack of inner magic slow him down, of course. He’s mapped all the secret passageways beneath Wellington Academy, he’s stolen the most arcane lore, and he’s managed to siphon energy out of the very air. When he touches me, we light up the room, and when we kiss…it’s pure fire.

We need that fire, too. A new threat has stormed into Wellington Academy, an illusionist magician who threatens to destroy our team of monster hunters and take down the whole academy once and for all.

Even worse, the only way Liam can access his full magic is if he and I fully bond…but he’s determined not to take advantage of me. So if I want to get this party started, I’m going to have to take control.

The Hunter's Snare is the third installment in author D.D. Chance's Monster Hunter Academy. The series features Nina Cross, a 24-year-old woman who, 2 weeks ago, traveled to Boston from her home in Asheville, North Carolina to find out if she has any family left. Nina is a harbinger, monster bait, and cipher. Monsters follow her wherever she goes. Readers are slowly learning piece by piece why this is happening. She's found herself as a student at Wellington Academy where demon hunting is considered a minor degree after years of being a primary focus.

She's become part of a team which includes Commander Frost, Zach Williams, Tyler Perkins, Liam Graham, and Grim Lochton. At the end of The Hunter's Curse, there was a huge revelation that leads to all sorts of questions about Nina and her mother Janet Cross. There was also a worry that former monster hunters have gone missing and the school is preparing for something drastic to turn the tide back to their favor. As with the previous installment, this book features one of Nina's four teammates: Liam. With his trusty backpack never far from reach, Liam could legitimately be called MacGyver.

He's brilliant, resourceful, and capable finding a solution to every problem. He's already mapped out the entire campus of Wellington Academy. Liam’s exterior hides his own insecurities. He is thought of as the black sheep of the family because he doesn't have access to his own magic. Or does he? If you are Liam, who just saw two of your friends get a boost from bonding with Nina, you hope that your time will come sooner rather than later. Sooner and he can help the collective defeat the enemies that are getting closer to the school and who may already be instead.

Sooner means he can handle attacks by a powerful Illusionist who seems to set their sights on Nina for some reason. Sooner and maybe Liam can finally break through of the insecurities that have weighed him down for so many years.

In many ways, this story is brutal so I will not spoil my reasons for saying so. Nina is still being left in the dark about her abilities as well as who family she might actually belong to. Liam knows more than he's saying and I may have missed the alleged Easter egg, but I don't remember him telling Nina why she's called a harbinger. I have said this for awhile now, I don't fully trust Grim. I do know that Grim will be the final piece of the puzzle when the series ends with The Hunter's Vow three days after my birthday in April so maybe we can find out why he's so mysterious and dangerous.

This is an honest review of a Review Team ARC.