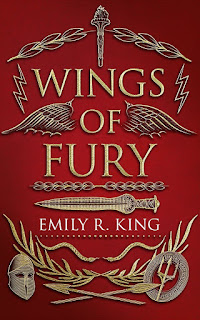 From Emily R. King, author of the Hundredth Queen series, comes an epic novel of ancient Greece, Titans and treachery, and the women who dare to rise up against the tyranny of the Golden Age.

My mother told me that men would speak about the Golden Age as a time of peace and happiness for all… However, the women of our age would tell a very different story…

Cronus, God of Gods, whose inheritance is the world. Among his possessions: women, imprisoned and fated to serve. The strong-minded Althea Lambros controls her own fate and lives to honor her dying mother’s plea to protect her two sisters at all costs. Althea’s journey toward crushing the tyranny has begun. It is a destiny foretold by the Fates. And she is following their visions.

On the southern isle of Crete, hidden among mortal women who have fled the Titans, is the Boy God, son of Cronus and believed dead. He shares Althea’s destiny to vanquish the Almighty—fate willing. Because Cronus has caught wind of the plot. He’s amassing his own forces against Althea’s righteous rebellion and all those who will no longer surrender or run. There will be war. If she’s to survive to write their history, the indomitable Althea must soar higher than any god.

Wings of Fury is the first installment in author Emily R. King's Wing of Fury series. In the beginning, there were three sisters: Cleora, Bronte, and Althea who were raised by their mother Stavra in Thessaly where women are mostly powerless and vulnerable. The God of Gods, aka Cronus, has reigned supreme in this world for 400 years. He takes pleasure in taking whatever woman he desires with no consequences for his actions. When Althea's impatience gets the best of her, she attacks a General named Decimus who puts a curse on her.

Basically it's a claim of ownership which means he can come for her whenever she reaches adulthood. In the process, Stavra is taken and spends 10 months with the God of Gods. When she returns home, she's pregnant. She makes Althea promise that she will protect her older sisters no matter what happens even though she's the youngest. Family doesn't abandon family and that means not even the bastard baby who is quickly taken away almost the minute she's born. In this world, parents disfigure their daughters intentionally as to make them undesirable to Cronus.

Althea knows that she must get away before Decimus comes for her. Althea meets an Oracle who knows about her oath to Stavra, as well as the fact that she sees darkness in her future. They do see a bright spot. They see an end to Cronus's tyranny in the form of a clever hero hidden away among mortals on the Island of Crete as well as a woman who desires justice and freedom. Althea may or may not be the special snowflake to break Cronus reign, but she's damn well not going to go down whimpering.

Althea has to find a boy god named Zeus on the island of Crete which doesn't allow any men to remain on the island. With the help of a soldier named Theo, an ex-soldier of the Almighty who longs to protect his mother from Cronus's wrath, along with her sisters, they soon find that Crete isn't exactly what they imagined. The island is filled with rescued women who were helped by Stavra and others. The island has no use for men, and Theo's presence is a distraction which leads to some stunning surprises and Althea facing her destiny when she meets Cronus face to face.

The story itself is set in the Greek Golden Age era and explores the women place and treatments during this mystical period when while men enjoyed peace, progress and fortune, women were not more than breeding slaves owned by men. By the end of the book, the author is dangling all sorts of twists and surprises for the reader to sift through. Especially when it comes to who Althea and her sisters really are. In that manner, one could call this a villains origin story since it is claimed that neither Zeus or Hera were good people.

You cannot have Greek Mythology without the drama because that is the reality of the time period and the stories that were written about the alleged Greek Gods who ruled the world. I haven't read a story about Cronus and his downfall in a very long time. I want to see how this story goes now that the key pieces are in place. We know that this will likely be three installments. I do believe it is fair to say that there are plenty of villains in this story beginning with Decimus and ending with Cronus.

People actually believed that Cronus ate all of his children to prevent them from ending his reign like he did to Uranus. I would call Decimus a pervert due to the fact that he lusted after an 11-year-old girl for 7 years, even going so far as to curse her with a mark on the back of her neck warning everyone else away from her. It's also a strange paradox that women are not allowed to go outside without wearing a mask. Apparently, the sequel called Crown of Cinder, will be releasing sometime in October which is good that readers don't have to wait so long to find out what's next. I do hope one thing. The resolution of the so called love triangle needs to be fixed quickly.