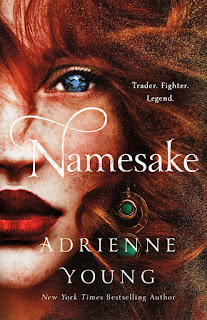 Welcome to a world made dangerous by the sea and by those who wish to profit from it. Where a young girl must find her place and her family while trying to survive in a world built for men.

With the Marigold ship free of her father, Fable and its crew were set to start over. That freedom is short-lived when she becomes a pawn in a notorious thug’s scheme. In order to get to her intended destination she must help him to secure a partnership with Holland, a powerful gem trader who is more than she seems.

As Fable descends deeper into a world of betrayal and deception she learns that her mother was keeping secrets, and those secrets are now putting the people Fable cares about in danger. If Fable is going to save them then she must risk everything, including the boy she loves and the home she has finally found.

Namesake is the second and final installment in author Adrienne Young's Fable duology. The story picks up a little bit after the ending of Fable. If you've read Fable, you know that our heroine, Fable, was blindsided by a notorious foe of her fathers in an attempt to use her as a pawn in a complex power game. Her desperation to escape is only hardened by the perceived betrayal she feels at realizing the ship's Navigator is none other than her father's second-hand from her childhood.

Onboard in the Luna, Fable doesn't have a friend. The crew wants to kill her and the man she thought was a friend has betrayed her and Saint. Worse, she has no clue if West knows what happened to her. Fable is given an ultimatum by Zola. She must dredge for her freedom or die. Then, things get worse when her own nemesis, Koy, is brought about on Jevali to help dredge for gems. Fable remembers very well the last time the time of them met face to face. Can Fable survive against someone eager to kill her?

In between leaving Jeval, where Fable spent 4 years begging and scraping in order to survive, and arriving in Bastian, Fable has a few incidents that will leave her reeling and eager to find a way out from under Zola and his crew. After a stopover in Sagsay Holm, Fable hears a rumor that someone is going port to port setting fires to ships looking for Fable. This news gives Fable hopes that either West or Saint has finally figured out who stole her away, and that they are on the way to help her.

Once she's in Bastian though, everything changes when she begins to understand that her mother had plenty of secrets that she kept to herself. Including, Holland, the grandmother she never knew about who is a shark just like her father. There are some twists and surprises that happen in Bastian and with Holland, Fable, West, and Saint that I'll skip over since they contain spoilers and will ruin the surprise for those who will one day read this final installment.

I think the most interesting dynamics of this story ends up being the relationship between Saint and Fable. Saint is conniving bastard at times and his past decisions regarding Fable were atrocious and apparently calculating. Everything he does in these two installments is perfectly tailored to play the long game of increasing his power. Saint, however, more than makes up for his past with some remarkable gamesmanship putting his adversaries in difficult situation.

There are some curious similarities between Isolde and Fable. Both were was stubborn, beautiful and a talented gem mages. West is bloody brilliant. He's such a harsh character, one who seems certain of the worst at every turn, but he adores Fable and goes to great lengths to save her. West's crew members have become family to Fable. They don't see her as Saint's daughter or just another dredger, but part of a family unit that has it's ups and downs and everything else in between.

Overall, it is very rare that we get a sequel released so soon after the first book by a major publisher. I have to say thank you to the author and the publisher for thinking ahead with everything going on in this world.