#Review - Castle of Refuge by Melanie Dickerson #YA #Romance #Historical 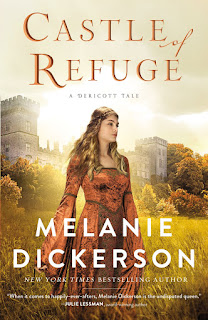 Ever since she was a child, Audrey wanted her life to be extraordinary. But as the daughter of a viscount born in late fourteenth-century England, the only thing expected of her was to marry—until an act of malice by her sister, Maris, four years ago damaged her face and her prospects. Though Maris was sent away, twenty-year-old Audrey is still suffering the scars of her sister’s cruelty. When her father announces his plans to marry off his damaged daughter and bring Maris home, Audrey decides to flee in search of her true destiny.

However, life outside her home is dangerous, and she soon finds herself attacked, sick, and in desperate need of help. She is taken in at Dericott Castle to be nursed back to health. While there, she decides to keep her identity a secret and work as a servant in the castle. But she doesn’t count on falling in love with the young and handsome Lord Dericott, who lost his arm several months earlier and bears scars of his own.

Meanwhile, Edwin—Lord Dericott—is curious about the new, well-educated servant’s identity. All he knows is that he’s quickly becoming smitten with her. When the man Audrey’s father wanted her to marry comes looking for her, she and Edwin must make life-changing decisions about what to believe and whether or not love is truly worth trusting.

Castle of Refuge is the second installment in author Melanie Dickerson's The Dericott Tales. This story begins in 1378, and then jumps 4 years to 1382. Once again, this story takes place in medieval England. While you don't have to have read the previous installment, Court of Swans, it would be nice to know that the events of Court of Swans still resonate with one of the main characters Lord Edwin Dericott as well as his sister Delia and their brothers. According to the synopsis, this is a retelling of the story called the Ugly Ducking.

In 1378, we are introduced to Audrey of Engleford Castle in Hampshire. She is 15 years old, and has been tortured and brutalized by her sister Maris ever since they lost their mother. Maris is a lunatic who her own father refuses to allow to marry for fear that she will end up killing her own husband. So, in a fit of rage, Maris attacks Audrey who ends up with a burned face and ear. Even though Maris is sent away, it only lasts for so long before she comes back home.

As Maris is returning home, a new suitor, Sir Clement, arrives to ask her father for her hand in marriage. Audrey chooses to run away from home and ends up at the doorstep of Dericott Castle where she is taken in and nursed back to good health thanks to the kindness of those who work there. While there, she decides to keep her identity a secret and work as a servant in the castle. But she doesn’t count on falling in love with the young and handsome Lord Dericott, who lost his arm several months earlier.

5 months ago, Edwin Dericott was wrongly imprisoned and accused of treason and murder by his step-mother. He lost his arm trying to save his brothers. Edwin is now the Earl of Dericott and supposed to marry Lady Ophelia. His six brothers are knights in the service to King Richard II. His sister Delia is happily married. Edwin is not like any other Earl. He actually seems to care about the people who work his lands. In fact, he gives them time off and to work the land and keep what they grow.

Edwin realizes rather quickly that there is something different about Audrey. In fact, she is the girl he met when he was a squire under Sir Clement. He watches as Audrey doesn't refuse to get her hands dirty. In fact, she seems to rather enjoy being around those who are considered lower than her own station.
As they get to know one another, Edwin remembers her, and refuses to return her to her father, knowing how terrified she is of her sister. The story intensifies when her sister appears unexpectedly, and stirs up chaos.

Both learn do deal with insecurities and concerns of acceptance. For Audrey, it was her facial scars, due to Maris. For Edwin, it was his missing arm, due to battle which makes him a bit unbalanced when it comes to riding a horse. Fate will put both of this scarred souls on the same path of healing and faith with the most unlikely circumstances. Yes, folks, this does have a strong Christian message which may bother some folks. For me, it's just a story where two broken people find their soul mates and fight to keep their growing romance alive against fatal odds and a psychotic sister.