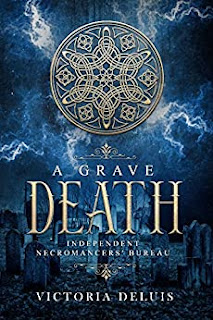 Danger rises from the grave in this thrilling tale of twists and turns, magic and murder.

As an agent for the Independent Necromancers’ Bureau, Cassie spends most of her nights releasing trapped spirits, banishing the undead, and hunting rogue necromancers.

But nothing could have prepared her for what she found tonight.

He had been her friend and mentor. Someone who saw her power and knew how to guide her future.

Someone had severed his soul.

With no way to communicate with her late friend, Cassie’s got her work cut out for her.

There are dark forces at play.

And what Cassie discovers, chills her to the bone.

But she’s a strong woman with immense power, great friends, and a cat.

She’s determined to solve his murder, and not even the dead can stop her.

A Grave Death is the first book in the Independent Necromancer’s Bureau.

A Grave Death is the first installment in author Victoria DeLuis's Independent Necromancers' Bureau. A slightly different offering in that the urban fantasy action takes place in Cardiff, Wales. 24-year-old Cassie Dune is a necromancer and a member of the INB. The INB is an organization or shall I say department responsible for reigning in zombies, removing unwanted ghosts, and tracking down rogue necromancers. She is stunned to find the corpse of her mentor, Marc Johnson, sprawled on a grave in the cemetery. Desperate to discover who killed him, Cassie attempts to contact Marc's spirit, but there isn't one.

Nothing. It's as if Marc's spirit was sucked into the void. Whatever happend to Marc, has the spirit world spooked. It is likely that another necromancer is responsible. Could it be one of her co-workers? Detective Inspector Luke Baron, Cassie's ex, is in charge of Marc's homicide case. Luke is adamant that Cassie stay far away from anything to do with Marc's homicide. But Luke should know better. Cassie will walk through Hell itself if it means finding the person who killed the person she respected the most in this world. Not even her newest partner Brandon Yale from Houston, Texas will stand in her way.

What's even more disturbing is that within hours of Cassie meeting Brandon, a zombie controlled by a necromancer shoots at him. The more she investigates, the more Cassie realizes that Marc was murdered by someone he knew. After another attack on Cassie and Brandon, Cassie realizes that a dangerous artifact is being used to control the undead. An artifact so deadly, so dangerous, that eons ago it has been broken up into multiple pieces including the one that was made to create Cassie's tattoo on her arm which gives her more strength and ability than any other necromancer.

As a plus, normally with a first installment, the author leaves a cliffhanger ending hoping that readers will pick up and read the sequel. That is not the case in A Grave Death. There is a beginning, a middle, and a wrap-up. Note: there are two other so called prequel's (Til Death & A Matter of Death) that are available to read. A Matter of Death tells the story of two ghosts who are close to Cassie: Dylan and Elizabeth. Til Death tells the story of Cassie and Luke as they deal with a wedding party gone horribly wrong. I, personally, do not think that you need to read them before jumping into this story first. Prequel's are basic set up points to introduce the world the author has created along with specific characters you will likely meet later.