#Review - Of Mettle and Magic by L.R. Braden #Fantasy 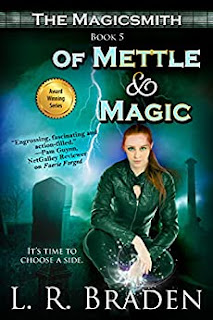 Now it’s time to choose a side.

When the Unified Church in Rome is destroyed by rogue sorcerers, tensions explode. Alex Blackwood will do whatever it takes to prevent a war between the humans, fae, and Earth paranaturals--even turn herself over to the PTF. But when a man she thought long dead walks back into her life at the head of a sorcerer army, surrender is no longer an option.

With all the world watching, and half hoping she fails, Alex and her friends scramble to find a peace that won’t cost them everything.

Of Mettle and Magic is the Fifth installment in author L.R. Braden's The Magicsmith series. After saving a dozen human children from Shedraziel, including Emma's younger sister May, and erasing their memories of what happened to them, Alex Blackwood and her friends now have to figure out a way to save them since they are now addicted to goblin fruit. They were promised help from Alex's grandfather Bael, but that help is slow in coming. What's worse is that Alex's recorded confession about being a Fae halfer who can handle iron without any side affects, is now spreading across the country and the PTF, Paranatural Task Force, wants very much to speak to Alex.
Across the world, lines are being drawn, sides chosen. Law-abiding members of the paranatural community, including practitioners and werewolves, are being hunted and sent to detention centers. Including Alex's very pregnant friend Maggie who is human.When Alex decides to turn herself in to Director Harris, unknown people attack the convoy she's in and she ends up in North Carolina. Those responsible are Alex's former best friend David who is a spy, and Uncle Sol who once worked for PTF before creating his own alliance of humans and paras. When a a man thought dead suddenly rises from the grave and attacks the Unified Church in Rome, Alex realizes this is larger than anything she can handle on her own.
She also realizes that she has to return to her grandfather's realm and beg him to not declare war on humanity. She needs the Fae to help her find a way to deal with a dangerous sorcerer/necromancer who is demon ridden and wants to end the world as Alex and her friends know it. That man just happens to be her own father Darius. Bael, the Lord of Enchantment, is like 5 steps ahead of Alex at every turn. If he helps her, she has to swear fealty to him and stay in Fae and learn about her abilities which she has wanted for a long time. If he refuses and goes to war with humans IE PTF, Alex and her friends will need to put an alliance of the willing from vampires, werewolves, practitioners, and even humans together in order to survive the end of the world.
Some good news is the return of some characters like Kai and Hortense who choose to join Alex and her friends as well as new characters who put their faith in Alex and join her alliance. The story also moves outside of Colorado for the first time to Missouri, North Carolina, as well as Arlington and Washington D.C. I highly doubt this is the final book in the series. The ending basically lays out the foundation for at minimum one more book since Alex has a new responsibility and war still hasn't been resolved with the Fae.
Thank you to Netgalley and the publisher for providing me with a copy. All thoughts and opinions are my own.