#Review - The Art of Deception by Leonard Goldberg #Mystery #Historical 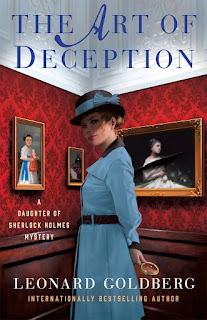 "Suspenseful and entertaining, with many twists and turns....This is one of the best Sherlock Holmes series since Laurie R. King’s Mary Russell books." —Historical Novel Society

In the west end of London, an apparently crazed individual is on the loose, breaking into art galleries and private homes to slash valuable paintings of women. Despite Scotland Yard’s best efforts, the criminal remains at large and continues on his destructive path.

When Joanna and the Watson's are called in to solve the mystery, they soon discover that although the canvases have been slashed, their backings remain pristine, with no cuts or scratches. The criminal, it seems, is no mere vandal—he's searching for something hidden behind the portraits.

Suspicion soon falls on two skilled art restorers who previously worked at the gallery where all the vandalized art was purchased. When Joanna finds the body of one in a bricked off fireplace at the gallery, the other is left as the prime suspect. But then he's discovered dead as well. Luckily, Joanna has a plan for ensnaring the criminal once and for all. But it must not fail, or more paintings—and lives—will be lost.

USA Today bestselling author Leonard Goldberg returns with another puzzling case for the daughter of Sherlock Holmes to unravel in this exciting mystery sure to be enjoyed by fans of Sherlock Holmes as well Laurie R. King and Charles Finch.

The Art of Deception is the Fourth installment in author Leonard Goldberg's The Daughter of Sherlock Holmes Mysteries. The story begins 10 days before Christmas, December 1916 when Inspector Lestrade visits with the Watson's. He's got a mystery for them. Lestrade informs Joanna that someone is on a trail of destruction in art galleries and private homes. Portraits of women, in particular, have been slashed as if the crazed madman is in search of something. The portraits from the Italian Renaissance Period have all been left behind. The only clue is a tattered scarf left behind, likely unintentional.

At first it appears to be simple vandalism, but soon it becomes apparent that the vandal has a purpose beyond destruction. What drew the vandal to target these paintings specifically? It is up to the trio to determine that purpose and thereby catch the criminal. Of course, there's a bit of a twist which I won't spoil as well as a pretty good guess as to who the alleged vandals are. Meanwhile, Joanna's son Johnny has his own troubles to deal with when Cholera visits his Eton school and he is forced to return home until he is given the all clear.

Dr. Watson is in charge of his grandson's case and it's highly interesting what was known medically at the time. It will give you pause as to what limited prevention's were in place and the number of deaths caused by simple lack of hygiene. *There have been many a reviewer who compared Cholera to Covid and that couldn't be any more ridiculous. Cholera is the result of food and water contamination which leads to runny diarrhea and dehydration. Covid seems to be a man made virus made in a lab which affects the lungs and heart in some cases. Cholera is still likely in underdeveloped countries thanks to lack of clean water.

Joanna is the result of a one time assignation between Sherlock Holmes and the only woman to ever outwit the famous detective; Irene Adler. Joanna inherited her parents deductive genius and displays aspects of Holmes's intellect as well as observation powers. Not unlike the Sherlock Holmes tales which were told by Dr. Watson, this series too is told by another Watson. Dr. Watson's son John who is now married to Joanna Blalock Watson, daughter of Sherlock Holmes.

Joanna’s keen mind and incredible insight have lead her to become a sought after investigator. Her forensic knowledge is on par to that of the younger Dr. Watson who is also a physician of pathology which comes in handy when a dead body needs to be examined or exhumed. As the clues come to light, all of the defaced paintings were retouched by an art restorer. If you know nothing at all about the world of paintings, the author brings so called experts to differentiate between the artists and why the villains are so eager to find what they are searching for. It will also show you how intelligent criminals can be when trying to rip off highly valued and expensive items.