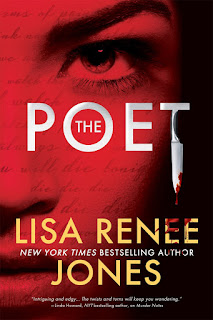 New York Times bestselling author Lisa Renee Jones delivers a gripping new thriller that will keep you on the edge of your seat until the very end.

A detective with a dark secret...

Samantha Jazz used to be one of the top profilers in the Austin PD, living for the chase of hunting down a killer and bringing him to justice. That is, until one bad case nearly destroyed her.

A killer with a hidden agenda...

There’s a new kind of serial killer on the loose––and people are turning up dead. The only clues to their murders lie in the riddles the killer leaves behind. A mystery with more questions than answers, and a suspicion that he’s taunting Samantha.

A dead body wrapped in a riddle...

Samantha will have to use all her wits to solve each new puzzle before the killer can strike again. But the closer she gets to the killer, the more she draws him to her as well. And in this thrilling game of cat and mouse––only one of them will survive.

The Poet, by author Lisa Renee Jones, is the first installment in the authors Samantha Jazz Series. Austin Police Department Detective Samantha Jazz  entered law enforcement to follow in her fathers footsteps. Jazz just come back to work after a few months leave after her father was gunned down right in front of her. One day back and an open case lands in her lap. Detective Roberts dubbed the killer ‘The Professor’ but Roberts is now missing, allegedly transferring to another department, forcing Samantha Jazz to work through the information with her partner Ethan Langford.

The killer is leaving calling cards behind; a poem inside of the victims mouths as well as an indication of cyanide poison being the cause of death. What does it mean? Is there a connection between the victims? Who is the killer? And more importantly what does he want with Detective Jazz? "The Poet" as Jazz now calls him, has sets his sights on Jazz and lures her into playing his game. He truly believes that she can be mentored into being exactly like him. The author gives readers a first hand glimpse into the disturbing mind of a serial killer and his obsession with Samantha Jazz.

Sam has a special skill set; she's able to correctly identify profile killers thanks to her FBI training that makes her perfect for this case. She also likely knows Poetry better than anyone else on the force since she ran a poetry club. With the help of Langford, and Miller, Jazz begins to unearth a pattern of poetry and jazz, leading our heroine to believe she is the inevitable target of a twisted mind. Jazz can feel the evil this serial killer provokes and discovers that the Poet's victims likely were not fans of poetry and that is why he makes the kill. Jazz discovers the one clue to her family that will make the reason the Poet has chosen her all that much clearer.

The Poet is smart, heartless, and conniving. These murders are like a game to him and yet he finds a way to justify his doings.
Samantha is pushed to the limits with her obsession to catch him, she even puts her job into jeopardy.

"Poetry is the Bible of words. It is history to be protected, lessons to be learned, a path to change society or prevent its demise."

"Poetry is history to be protected, lessons to be learned, a path to change our society or prevent its demise."

"Anyone who stands between destiny and a Master of the Word such as me, or his protégée, such as Samantha, must be eliminated."

After numerous ups and downs, and a long drawn out investigation into another likely suspect which doesn't pan out, Jazz makes a choice which is why you will see so many reviewers calling her Agent Jazz, instead of Detective. This makes perfect sense because of the fact that she has one of the highest clearance rates in all of the country which makes her an excellent choice for the FBI. I have read where people thought that Lang and Jazz should have been lovers. I think they were just find as partners. Besides, Wade has more going for him than Lang.

Conclusion: I really liked Samantha and will definitely continue reading the next book in the series which is being called The Girl Who Forgot.