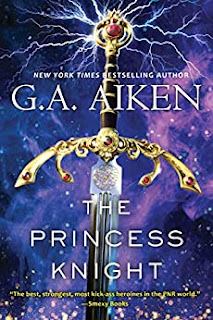 In New York Times bestselling author G.A. Aiken’s gripping new fantasy romance series, the Blacksmith Queen must confront armies and pretenders desperate to take her new-won crown. But with the Princess Knight at her side and a centaur warrior clan at her back, she’ll risk everything for victory . . .

Gemma Smythe dedicated her life to the glory of battle. With her fellow War Monks, she worshipped the war gods, rained destruction on her enemies, and raised the dead when the fancy took her. Until her sister Keeley became the prophesied Blacksmith Queen, and Gemma broke faith with her order to journey to the Amichai Mountain and fight by Keeley’s side.

The Amichai warriors are an unruly, never-to-be-tamed lot, especially their leader-in-waiting, Quinn. But when the War Monks declare support for Gemma’s ruthless younger sister Beatrix, the immaturity of her key ally is the least of Gemma’s problems. She has to get to the grand masters, dispel their grudge against her, and persuade them to fight for Keeley and justice. If her conviction can’t sway them, perhaps Quinn’s irritating, irreverent, clearly unhinged, ferocity will win the day . . .

The Princess Knight is the second installment in author G.A. Aiken's The Scarred Earth Saga. This story digs deeper into the background of Gemma, sister of Queen Keeley Smythe, and Monk Knight of the Order of the Righteous Valor who worships the War God Morthwyl. When Gemma left home 10 years ago, she dedicated her life to the Order after giving up her plans of following in her sister and mothers footsteps. She has vigorously trained and fought for her God but was prevented from being promoted by a jackboot with an axe to grind.

But when the events of the previous book happen and a prophesy of a Blacksmith Queen is made known and coming true, she drops everything to go to her family as the late King's heirs will kill Keeley, Gemma's sister, before letting her come to power. Gemma is very different from her sister in many ways. Where Keeley, who carries a huge hammer, accepts everyone and offers no judgement and has demon wolves who follow her everywhere. Gemma is paranoid and sees danger in every corner. She also has a hard time at letting anyone in or near her heart. Gemma also has the ability to raise the dead.

Then there's Amichai warrior Quinn of the Scarred Earth Clan whose people have allied themselves with Keeley, Queen of the Western lands. Amichai's are centaurs who can take human form. Quinn does everything he can to break the ice surrounding Gemma's heart. He tells his cousins and brother that Gemma actually adores him. Both Gemma and Quinn could be a bit ridiculous at times, but it just added to the overall fun of the story. The eventual romance between Gemma and Quinn takes backstage amid the battles, the politics, the plans and every new character that appears.

Gemma, Keeley, and their allies discover that someone is tearing through houses of worship and stealing their artifacts. Since Beatrix worships to no God, that leaves only one person to blame; Cyrus who has his own army and plans on attacking Keeley when he has enough support behind him. Gemma decides that it is time to put away her past and pull together as many allies as she can to stand with Keeley. That includes walking back into the den of the beast and asking the Monk Knights for help.

There is part of this story that is from Beatrix's part, and let's just say that this girl is cold as ice and lacking any soul or emotions. She literally tried to kill her older sister who did nothing but be supportive of her for her entire miserable life. One of the sisters has to die, and we all know who I am hoping for to fall. We also get Ainsley, the 19-year-old sister of Keeley and Gemma who seems to have been ignored by her family. She's grown up to be a remarkable young woman who excels with her bow and arrow, and it's a good thing too since Ainsley becomes an important cog in the story's overall resolution.

One could honestly say that the story took too much time away from Keeley, but seemingly introduces the next villain in the series who appears out of nowhere along with several dragons looking for a certain queen who shall remain nameless for fear of spoilers. I am sad that we haven't had a new book in this series since November of 2020. Yes, I know what the world was dealing with folks. I'm just saying that there absolutely needs to be a third installment in this series to resolve the presence of a new character who arrived in style.