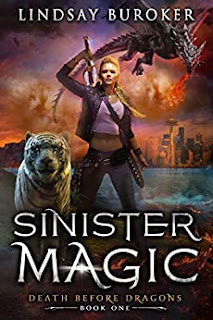 When magical bad guys hurt people, I take care of them. Permanently.

This doesn’t make me popular with the rest of the magical community—as you can tell from the numerous break-ins and assassination attempts I’ve endured over the years. But thanks to my half-elven blood, a powerful sword named Chopper, and a telepathic tiger with an attitude, I’ve always been able to handle my problems with aplomb. Maybe some cursing and swearing, too, but definitely aplomb.

That changes when my boss is afflicted with a mysterious disease, a government agent starts investigating me, and a godforsaken dragon shows up in the middle of my latest job.

I’ve taken down vampires, zombies, and ogres, but dragons are way, way more powerful. And it doesn’t look like this one is going to like me.

Worse than that, he wants to use his magic to compel me to do his bidding, as if I’m some weak-minded minion.

That’s not going to happen. I’d die before being some dragon’s slave.

But if I can’t figure out a way to avoid him, save my boss, and get rid of the government spook, I’m screwed. Or dead. Or screwed and dead. And that’s never comfortable.

Sinister Magic is the first installment in author Lindsay Buroker's Death Before Dragons series. 40-year-old Val Thorvald is a 1/2 Elven assassin who carries a long sword called Clopper she won in battle. She has a great silver tiger called Sandari who she has a telepathic link to which she got from a vanquished foe. She has a powerful cloaking charm which was won in a prize contest. With all of her charms and her elven blood, she tends to heal quickly from injuries. She has the ability to sense magic which apparently came from her unknown father.

Val is an Army veteran who has spent the past 10 years working for the government hunting down magical beings that have committed crimes against humanity. She has a daughter and an ex-husband that she doesn't visit since doing so would put them in harms way by magical creatures who hold a grudge. Val has a rather large enemies list. She's called everything from Ruin Bringer, to Slayer. While hunting down and killing the last of three Wyvern who killed children, Val encounters a very angry Dragon. Lord Zavryd is a shape shifting Dragon who claims he works for the Dragon Justice Court bringing malcontents to justice and rehabilitation.

He claims that dragons rule all 17 cosmic realms except for Earth which he claims is a place where stowaways from other realms end up. Dragons like elves and dwarves left Earth long ago. Val is reminded how dangerous her job really is when her boss, Colonel Willard, ends up hospitalized and under suspicion of a whole raft of criminal activity that she couldn’t possibly have had a hand in. So now Val needs to deal with a dragon who decides that Val can pay him back by serving as “bait” for all of the miscreants who have fled justice and settled on Earth with a stolen dragon artifact, and uncover who has it in for her boss.

With a little help from her friend Nin, who makes weapons as well as running a food truck, part- dwarf Dimitri, who rents space from Val's mother Sigrid, Zoltan, an alchemist who just happens to be a vampire who may have the cure to help Willard survive. All he needs is dragon blood, and dark elves blood. Easy peasy! Oh, and let's not forget that Val finds herself coming face to face with dangerous Dark Elves and it's a dog fight to see if she can survive while a certain dragon looks on bemused by her actions.

One of the reasons I liked this story so much is that the author actually uses a female character who is fairly close in age to me. Some younger audiences may believe this is unbelievable, but so is a 15-year-old who suddenly thinks he or she can save the world with a skill that comes out of nowhere. There is a lot of banter between Val and the Dragon as well as Val and Sandari. All if it is in the first person narrative. I would have loved to have a third person narrative from the Dragon as well as others, but such is life.