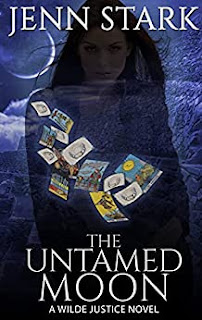 Night is falling on the world of the Arcana Council, and the darkest corners of the psychic community are stirring, eager for war no matter the cost.

In a last-ditch effort to maintain the balance of magic, Justice Sara Wilde launches an all-out search for the Moon, one of the Council’s most powerful missing members. With a team that includes the darkly formidable Magician, the tech-savant Fool and the incomparable Nikki Dawes…Sara likes her odds for finding her quarry in time.

Unfortunately, she’s not alone in the hunt.

A cry for help from the depths of South America triggers Sara’s oldest enemies, the cutthroat artifact hunters of the arcane black market. In a race to find the deeply secretive, elusive Moon, the winner is promised power beyond their wildest imagination. Are these claims pure lies and moonlit fantasy? Or a sign that when the Moon is in play, nothing is ever as it seems?

The truth is deadlier than anyone expects.

Even your shadow will betray you when you hunt The Untamed Moon.

The Untamed Moon is the Seventh installment in author Jenn Stark's Wilde Justice series. Summary: Sara Wilde who once was a tarot card wielding treasure hunter, is now Justice of the Arcana Council. The Arcana Council is a group of sorcerers, some actual demigods, who are supposed to keep the magic balanced. Sara, in her position that she took over at the beginning of this spin-off series, is supposed to right wrongs perpetrated against connecteds by other connecteds. Spoiler alert: there's a whole lot of wrongs to deal with.

At the end of The Night Witch, Sariah Pelter has become Sara's right hand doing things Sara won't do. Which is where we begin the story. Sara and Sariah find themselves in Pennsauken, New Jersey which is said to be a gateway to Hell. Since Sariah and Sara both know a thing or two about Hell, both spent time there, they also know that what is happening here might be a key to what happens later in the story. Joining them there is Krieos, the Devil of the Arcana Council and its leader. It's interesting that Sariah has an ability that comes in handy more times than not.

Sara once again proves that we, as readers, need to know what abilities her parents have since she appears to get stronger, and stronger every single time out. I am not bloviating here. She is able to do things that no other member of the Council is able to do. Especially when it comes to her connection with Armaeus, the Magician of the Arcana Council. Now, Sara and her immediate allies like Nikki Dawes, Simon the Fool, Armaeus, and yes, even Krieos have enemies at every turn. They have the Shadow Council which has been itching for a war.

They have others who may be closer than they think whose loyalties to the Council may be more questionable than not. The story's main focus is on finding the missing Moon and the Star before their enemies do. When a ring sent by a long time artifact hunter arrives on Sara's door, she's positively sure that trouble awaits. The search for Roland Franklin begins with Sara, Simon, Nikki, and Nigel Friedman, a Brit artifact hunter and once adversary of Sara's, traveling to Peru where other groups of artifact hunters have been drawn to. Where ever Sara goes, trouble isn't that far behind.

With the Moon not being seen for a thousand years, and enemies biting at their heels, time may be running out. Sara and her allies will fight demons, get a visit from the Syx who have become series regulars, and get introduced to a new Council member, while wondering if any of them will survive the war that is closing in on them.  I'm going to stop here as what happens in this story will rock your block off if you've read this series from the beginning. There is a shocking revelation, although it really will make sense once you've read about it.

Alas, the author gives readers welcome news about when the next installment, The Shattered Dawn, is going to be released. Thus, we don't have to wait that long before the 8th installment is released and it should be a doozy!