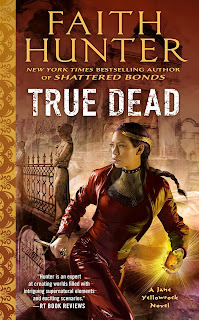 Jane Yellowrock goes back to the city where it all began in the newest installment of this thrilling New York Times bestselling series.

Jane used to hunt vampires, but now she’s their queen. She’s holed up in the mountains with the Yellowrock Clan, enjoying a little peace, when a surprise attack on her people proves that trouble is brewing. Someone is using very old magic to launch a bid for power, and it’s all tied to the place where Jane was first drawn into the world of Leo Pellissier—the city of New Orleans.

Jane is compelled to return to NOLA because someone is trying to destabilize the paranormal world order. And because she now sits near the top of the vampire world, the assault is her problem. She will do what she must to protect what’s hers. Her city. Her people. Her power. Her crown.

True Dead is the 14th installment in author Faith Hunter's Jane Yellowrock series. If you haven't read Shattered Bonds or Dark Queen yet, I highly recommend that you do so since this story is not a standalone. It's the aftermath of the previous books events. Jane is a shapeshifting, skinwalker who used to hunt vampires for a living. She was very good it. After moving to New Orleans, she soon became the master of the city's enforcer. After standing with Leo Pellissier against a serious threat from European vampires, she's now the Dark Queen of the Mithrans thanks to powerful relics.
She's also Leader of Clan Yellowrock, and Master of the City New Orleans which means that she literally has a large group of people surrounding her trying to keep her safe. To top things off, Jane has become a scary combination of beast and human since coming back from the arcenciel rift. A half Human/Half beast mode that makes her look as deadly as anything, or anyone she'll have to face. When Eli plans a recon that turns into a rescue, it ends in a surprise attack on Jane and Bruiser by vampires, humans, onorio's, and a firestarter.
Jane knows that it's because she's become the most valuable target in the world. She's not only has political value, but the significance of taking her down and out of the picture, would change the balance of power. Someone is using very old magic to launch a bid for power, and it’s all tied to the place where Jane was first drawn into the world of Leo Pellissier—the city of New Orleans. Leo had been fighting the European vamps for centuries, playing a long game. When Jane arrived on the scene, he knew she would be the wild card to tip the world on its axis.
Jane is compelled to return to NOLA because someone is trying to destabilize the paranormal world order. And because she now sits near the top of the vampire world, the assault is her problem. Another reason to return to NOLA is the wedding between Jodi and Wrassler which is beautiful. Part of the book is once again through the eyes of beast with banter between Beast and Jane. It's funny if you think about it. One upon a time, Jane was an orphan. She's since learned she has a brother who works for PsyLED. She's has a relationship with Bruiser which only gets stronger.
She has new characters who try to keep her out of danger knowing that they will eventually fail since nobody keeps Jane from doing what she wants to do. There is a surprise in this book which someone have already spoiled. If you like spoilers, try Goodreads. There's also a hint of things to come in the next installment which I won't spoil. This book is filled with action, powerful new villains, and Jane being Jane and not taking any crap from anyone.

Chapter One title: A Dervish in the Dark. Poetry with Bloody Blades.

Beast woke in big bed, tangled in Jane clothes. Sniffed soft, not loud, not what Jane called Flehmen sound, but hunter’s sound. Silent. Bruiser was not in big bed. Had not slept in big bed.

Jane had gone to sleep in human form. Jane body turned into Beast while Jane slept. Was not first time Jane body changed shape in sleep, and not when Jane or Beast wanted change.

Had happened many more than five times since Jane was healed in waters of arcenciel rift.

Sickness that was killing Jane was gone. But much was wrong with Jane body. Jane could not hold shape for many hours. Beast did not know how to help Jane. Was bad.

Angel of Beast—Hayyel—was not helping Jane.

Mate of Jane—Bruiser—could not help Jane.

Molly, mate of Molly—Evan—Angie could not help Jane.

Jane could not help Jane. Jane was angry.

Beast did not worry as stupid humans worried. But Beast feared Beast had missed important thing.

Beast went to window. Put front paws on narrow ledge, standing high on back paws to see into dark with Beast’s night vision, looking into world of silvers and greens and grays. Looked out at hills and many trees with bright leaves, what Jane called mountain forest in autumn. Beast did not want to leave mountains. Was best time to hunt: female deer in heat, male deer stupid with rut and running fast, fat autumn moon making hunt effortless, cool wind so Beast could hunt for long time.

But Jane had to leave mountains and go to place of salty water called New Orleans. Was Dark Queen need. Beast understood power in African lion pride or Puma family clan or clowder of cats. Understood that Jane had to keep peace, hunt Jane enemies, swat and claw and nurse Jane clan, and do Jane things. Understood. Did not like.

Beast tilted head. No light came from place where grapes rotted into pungent stench to make human wine. Was stupid thing to do, but Bruiser said that making wine was like Beast burying carcass in snow to eat later. Bruiser was not in wine-making place. Bruiser was not here. 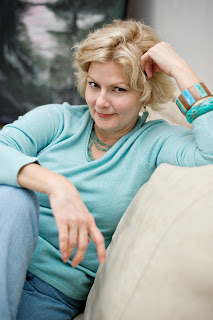 Faith Hunter is the award-winning New York Times and USA Today bestselling author of the Jane Yellowrock, Soulwood, Rogue Mage, and Junkyard Cats series. In addition, she has edited several anthologies and co-authored the Rogue Mage RPG. She is the coauthor and author of 16 thrillers under pen names Gary Hunter and Gwen Hunter. Altogether she has 40+ books and dozens of short stories in print and is juggling multiple projects.

She sold her first book in 1989 and hasn’t stopped writing since.

Faith collects orchids and animal skulls, loves thunderstorms, and writes. She likes to cook soup, bake bread, garden, and kayak Class II & III whitewater rivers. She edits the occasional anthology and drinks a lot of tea. Some days she’s a lady. Some days she ain't.

Tour-wide Giveaway!
Enter to win some fabulous prizes! Giveaway is open to US residents only.
● 3 winners will receive a bag of Faith’s tea blend + a signed manuscript revision page


a Rafflecopter giveaway
http://www.rafflecopter.com/rafl/display/9751c04257/?
Check Out These Other Tour Stops!
http://www.ltpromos.com/2021/08/19/faith-hunters-true-dead-blog-tour/