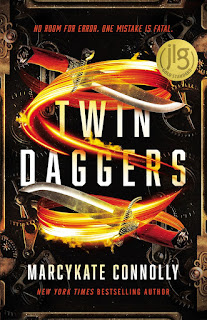 From New York Times bestselling author MarcyKate Connolly comes Twin Daggers, a fantasy spin on Romeo and Juliet … if Juliet had a twin sister and they both were magic-wielding spies sent undercover on a mission to find and kidnap the heir to the Technocrat throne.

In this first book of a YA fantasy duology, magic-wielding spies and twin sisters Aissa and Zandria want nothing more than to take revenge on the society that conquered their people … but for Aissa, completing her mission could mean choosing between Zandria’s freedom and saving the life of a sworn enemy who has stolen her heart.

Twin Daggers is the first part of a two part duology by author MarcyKate Connolly. Once upon a time in the land of Palinor, Magi were once powerful people until they were decimated by people called Technocrats during the Magi War. Technocrats bombed schools, hospitals, and those who were left, went into hiding. 16-year-old Aissa Donovan’s life is a web of carefully constructed lies. By day, she and her sister Zandra play the role of normal young Technocrats eager to fulfill the duties of their new apprenticeships.

By night, they work for the Magi’s spy organization, which seeks to overthrow the Technocrats who subjugated their people. Aissa and Zandria have been given the job of mapping the tunnels underground. They are searching for a lost library where they hope they will find spells stolen by the Technocrats. The sisters take their lives in their hands knowing that if they are caught, it is game over. They have two basic rules: never trust a Technocrat. Never underestimate a machine. Aissa is unique in that she has control over machines.

Soon Aissa is given her greatest mission: find and kidnap the heir to the Technocrat throne, who is rumored to be one of the Heartless—a person born without a working heart who survives via a mechanical replacement—and has been hidden since birth. Aissa has never been one to turn down an assignment, even if the hunt is complicated by a kind Technocrat researcher who is determined to find a cure for the Heartless. A researcher who finds that Aissa may hold the answer to finding a cure.

Aissa’s new apprenticeship is a gift; she is able to get into the palace and find a way to help her people get revenge. But when Zandria is captured, Aissa will do anything to get her sister back. Even if it means abandoning all other loyalties … and risking everything by trusting the enemy. Aissa is the more serious and reserved of the sisters, while her sister is impulsive and charming. The more you read this book, the more you will find that nothing is what it appears, and secrets, and more secrets could cost the sisters everything because of betrayal and Aissa falling for the boy who makes her heart beat fast.

Aro is a very intriguing character, he is compassionate and determined. He is willing to make up his own mind, and not just follow what he is told. Remy is also a very interesting character, a lifelong friend of Aissa and Zandria, he is at times brooding and secretive, and there were times when I didn't know what to think of him. The one thing you can guarantee with duologies is that there will almost always be a cliffhanger ending. There are a lot of twists and questions and I am happy that I have the sequel ready to go on my Kindle.