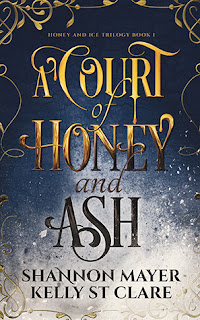 Series: Honey and Ice Trilogy # 1
Format: Kindle, 420 pages
Release Date: July 6th 2021
Publisher: Hijinks Ink
Source: Kindle Unlimited
Genre: Fantasy
Orphaned. Trained to fight. Raised to fear the power of Underhill. Secretly in love with a man who doesn’t want me.
I’m still just Alli, aka the half-human orphan fae, but my life is looking up for the first time. It only took me my whole 24 years. But when Underhill—the ancestral home of the fae—shatters, making it impossible for any fae to enter, I’m the only one who knows who did it. A secret that will be the death of me if I do nothing. A brutal madness spreads through the fae as they lose their connection to Underhill, and to save my people, my only choice is to leave all I have fought for and go on the run.Unless I figure out how the hell magic that has existed since the dawn of time was destroyed with a single touch, well, an entire life spent fighting to prove myself isn’t going to mean anything at all.I must find the answer to the riddle of Underhill’s shattering.Hunted by the very man I loved once upon a time.

A Court of Honey and Ash is the first installment in co-authors Shannon Mayer, and Kelly St. Clare's Honey and Ice trilogy. This story follows Kallik aka Alli who is a 1/2 Fae, 1/2 Human mutt who was abandoned, and later sent to be trained. At the beginning of this story, the final leg of the training is about to begin to test each candidates weapons skills, bravery, and mind. For Alli, her toughest test is not only surviving other backstabbing candidates, but to discover her own strengths which I won't spoil.
As the training ends, each candidate is supposed to pledge their loyalty to King Alexsandr of the Seelie Court who just happens to be Alli's bastard of a father. The oath is performed by the Seelie Court's Oracle. When Underhill shatters as Alli swears her oath, the earth shakes & all fae, Seelie & Unseelie alike, are in danger and of course, Alli is blamed. When Alli decides to flee her father's court to the Alaskan Triangle, her best friend, Hyacinth (Cinth), who is both loyal and a great baker, joins her. As Alli is trying to put the mystery together of what happened to Underhill, she meets Fae who have chosen to exile themselves to the Alaskan wilderness.
To make matters worse, Faolan, the subject of Alli's angst, and the boy she fell in love with as an orphan, is not only a member of the Unseelie court, but he has his own investigation that may hinder Alli's attempts at learning the truth about that fateful day. Alli and Faolan's relationship is filled with complications since he's loyal to the Unseelie Queen, and she's Seelie. Romeo and Juliette? On top of all that, the authors kinda pushed the enveloped towards having a love triangle which killed my rating.
Alli is a pretty good overall character. She's a pretty good fighter, and can hold her own against pretty much everyone in this story. But she absolutely has daddy issues, and she really can not stand her stepmother who just happens to be Queen Consort Adair who not even the Unseelie Queen has anything nice to say about her. She also spends way too much time drooling over Faolan, and her jealously over how many men her friend lures to her is a bit over the top. There are some actual hints as to who the villains are in this story and no, I am not going to spoil it for you.
In fact, if you are looking for a synopsis for books 2, and 3, good luck! You don't find them anywhere! This book ends on a brutal cliffhanger that the authors will have to find a way to fix quickly in the next installment.

“Death is rising amongst us, Kallik. Stop the children of the moon before they destroy us all. The spirits are angry, but they will guide you.”