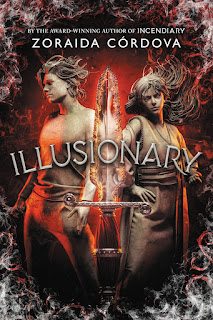 In this thrilling adventure, our magical heroine embarks on a dangerous journey in order to bring justice to the kingdom—perfect for fans of Sabaa Tahir and Sarah J. Maas.

Reeling from betrayal at the hands of the Whispers, Renata Convida is a girl on the run. With few options and fewer allies, she's reluctantly joined forces with none other than Prince Castian, her most infuriating and intriguing enemy. They're united by lofty goals: find the fabled Knife of Memory, kill the ruthless King Fernando, and bring peace to the nation. Together, Ren and Castian have a chance to save everything, if only they can set aside their complex and intense feelings for each other.

With the king's forces on their heels at every turn, their quest across Puerto Leones and beyond leaves little room for mistakes. But the greatest danger is within Ren. The Gray, her fortress of stolen memories, has begun to crumble, threatening her grip on reality. She'll have to control her magics—and her mind—to unlock her power and protect the Moria people once and for all.

For years, she was wielded as weapon. Now it's her time to fight back.

Illusionary, by author Zoraida Cordova, is the second and final installment in the authors Hollow Crown duology. The 15th century Spanish-inspired world is expanded in this sequel with ventures to new cities that are fully and beautifully realized. The story is told in the first person narrative by Renata Convida. Renata is wanted for crimes against the people of Puerto Leones, murder, collusion, and illegal use of Robari magic. Renata is a complex character. She basically has no allies, just those with similar goals. The Whispers never trusted her.

The kingdom used her as a weapon. She's realizing that Cas, out of everyone else, including Dez, was the boy who saved her as a little girl. At the end of the previous story, Renata, once a rebel, once a whisper, now a traitor, decided to leave with Castian to find the legendary Knife of Memory. Renata, who created a vault called the gray, gets trapped in her own mind at times, slipping into a void that swallows memories. Castian is an Illusionari made of shadows and lies after orchestrating his reputation for years. We also learn some interesting twists on Castian's past including his mothers choices.

After years of stealing memories from the living at the behest of Justice Mendez and King Fernando, they have become her own and thus she has difficulties at time focusing on the present situation. She wants to trust Dez, but he constantly leaves her and her so called friends abandoned her when she needed them the most. The journey to find the Knife is a long one that will take them across the country and over the sea beyond, and with danger on all sides and few allies including Leo who was working as a spy for Lady Nuria.

Book really begins with King Fernando trying to figure out how the rebels and Renata were able to infiltrate the kingdom. He gives Leyre Los Rosas, an illegitimate child/heir from another kingdom, a task to kill Prince Castian as well as a sextant that is supposed to lead her to Cas. Instead of killing Cas, she decides that she's going to help Renata and Cas find the Knife of Memory. Meanwhile, Renata and Castian are playing the part of a married couple while they search for Dez. 40 years ago, Fernando went on an expedition that changed the course of history.

Renata, Cas, Leo, and Leyre travel to a far off land in search of the Knife of Memory and a way to release the memories of the Morai and their history. Ren actually gets some much needed lessons from a woman who could be called a pirate. Illusionary gives readers more snippets of Renata’s past which provided answers and confirmation to some questions formulated from reading the first book. Cas and Ren travel a long distance through many cities and landmarks in this one, so the map in the front of the book was very helpful to keep track of where they were going.

This story has a predictable ending I won't argue with that point. However, I am going to diverge from others in saying that the ending would have been depressing if it wasn't written just the way it was. Ren needs a break from the limelight and how the author sets her new path is the right one in my humble opinion.