#Review - The Endless Skies by Shannon Price #YA #Fantasy #Epic 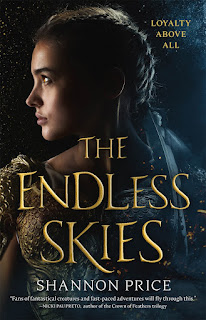 A breakout epic fantasy YA about a girl's desperate quest to save her city, for fans of Adrienne Young and Wonder Woman

High above the sea, floats the pristine city of the Heliana. Home to winged-lion shapeshifters—the Leonodai—and protected from the world of humans by an elite group of warriors, the Heliana has only known peace.

After years of brutal training, seventeen-year-old Rowan is ready to prove her loyalty to the city and her people to become one of the Leonodai warriors. But before Rowan can take the oath, a deadly disease strikes the city’s children. Soon the warriors—including two of Rowan’s closest friends—are sent on a dangerous mission to find a fabled panacea deep within enemy lands.

Left behind, Rowan learns a devastating truth that could compromise the mission and the fate of the Heliana itself. She must make a decision: stay with the city and become a warrior like she always dreamed, or risk her future in an attempt to save everyone she loves. Whatever Rowan decides, she has to do it fast, because time is running out, and peace can only last so long...

Shannon Price's The Endless Skies is the authors sophomore follow up to A Thousand Fires. This book revolves around three key players: Shirene, Rowan, and Callen. Shirene begins the story as the Ninth Sentinel, but soon becomes the King's Voice replacing an alleged traitor who left Heliana for the human realm of Balmora. Rowan is Shirene's younger sister, a warrior-elect who is just finishing 4 years of brutal training, and someone whose character growth turns the pages of this story. Callen is Rowan's best friend, a warrior, who believes that Rowan is his fated mate but she may have already fallen for another.

All three characters are Leonodai; a race of shifters who can transform into winged lions. They are one of four remaining Kingdoms; 2 on Vyrinterra, 1 in the seas, and one in the skies. There is a dire situation for all Leonodai. In the floating city of Heliana, children under 12 are dying of a mysterious illness, and it continues to spread quickly. The only cure just happens to be in the human lands where the Humans are refusing to accept peace talks after the King refused to help them feed their people. When Callen is chosen to be among those who are given orders to bring back the healing flower, Rowan does the unthinkable.

After learning from the alleged traitor that the scholars and those in charge are lying about the situation, she goes absent without permission and flies to Balmora hoping she can help find the healing flower before the prince heir dies in a few days. She knows she risks being branded a traitor but Rowan makes her decision to leave home and follow the warriors already searching for a cure. She gets more than she expected. The only place that this flower is likely to be found is in the human city of Ramsgate.

But Ramsgate doesn't care for the Leonodai after they refused to help provide food for the humans living here. Plus, the General in charge is just itching for a war between races. In this world, humans are basically destroying their own planet. They have infected the waters, and the air, and were responsible for killing off one of the original races. Sadly, there is a minor love triangle for one of the characters. You can guess who. This ends up resolving itself when one of the character realizes that her heart belongs to the one person who has been their since they were kids.

This isn't by any means a spoiler, but I will say this. I don't appreciate characters being killed off for absolutely no reasons whatsoever. I am not going to say who falls, and who lives. I am going to say that the ending makes absolutely no sense with one of these characters missing. In fact, the death takes place literally pages from the ending itself! I appreciate the fact that this is a standalone and not part of a series. I appreciated that the book revolved around 3 characters so that we could see what was happening elsewhere, but Rowan is still my favorite.